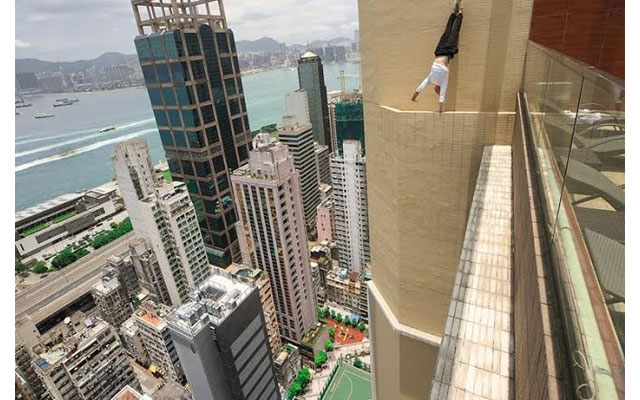 He was also shown leaping between beams on the roof of a condo tower at 8 Mercer St.


Earlier this month he had been filming a sickening video high above city streets.


Cricket was arrested by Toronto police at 8 Mercer St. on Nov. 12 over dangerous rooftops stunts.

One of the security guards at Graywood Developments Inc. who saw Cricket gaining access to the roof had alerted the Toronto Police.

"He was charged with Break & Enter, and Mischief Under [$5,000],"  Toronto police said in a statement. "Another man, presumably the camera man, was charged with those two offences plus Possession of Break-in Instruments."

Cricket and other urban explorers had been accessing the roof at 8 Mercer St. and other properties around Toronto using bolt cutters and crowbars, said a representative from Graywood Developments.

The residents had been asked by the company not to allow strangers into the building.

Cricket had filmed dangerous stunts in Dubai and Hong Kong and has more than 300,000 followers on Instagram.

“The man has zero fear of heights and is continuously pushing the sport of Urbex," recent profile by Red Bull TV said.

His Toronto video was promoted on social media by the Swiss watchmaker Bomberg.

Cricket was reported to have said “even hundreds of metres above the ground, all limits are self-imposed.”

The company has not responded to any questions from CBC Toronto.

"I work only on a commercial basis, the interview is worth $500," when he was asked for a response.