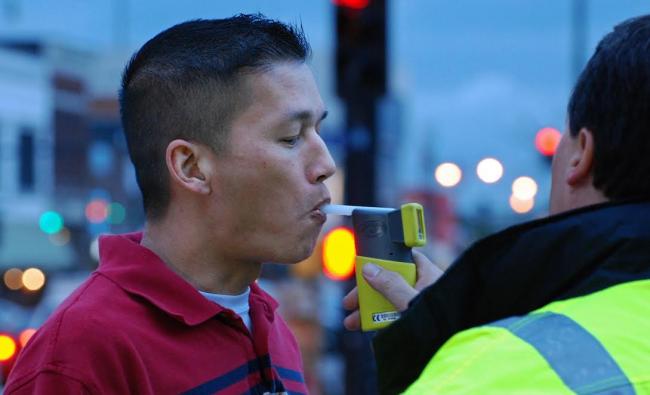 Ontario drivers to lose their licence if found high on drugs

As per the new rules, if a driver fails the road-side sobriety test on account of drugs, they will lose their licence for three days and also has to pay a $180 licence reinstatement fee to the province.

Sgt. Kerry Schmidt, spokesperson for the Ontario Provincial Police (OPP), Highway Safety Division says, "It's great because we now have more tools for us to do our job.”

"Hopefully it's a deterrent for these drivers to understand that you can't just have a joint or have some sort of drug in your body thinking that getting a little buzz isn't going to cause any problems,” explains Schmidt.

Sobriety tests include eye exams, walking heel-to-toe in a straight line or standing on one foot during a mental challenge.

If one fails the sobriety test, he/she will then be sent to the police station for a number of physiological tests, including blood pressure and body temperature, by an officer presumably, a drug recognition expert.

However, if the driver fails to clear the sobriety test his/her licence would be suspended for 90 days and their vehicle will be impounded for seven days.

The OPP or the Toronto police could not provide the latest figures of the number of people impacted by the new legislation on the very first day.

Ontario Transportation Minister Steven Del Duca said in a statement, "Whether it's drugs or alcohol, impaired driving is never okay. Not only do you face tough penalties, but you risk your life and endanger everyone around you. It's not worth the risk. If you're not sober, don't get behind the wheel."

According to statistics released by the Provincial police, drug-impaired charges increased from 131 to 151 by the end of August 2016 in comparison to last year. The trend is even more pronounced in Toronto.

Gregg Thomson from Mothers Against Drunk Driving Canada applauds the new legislation. He lost his son 15 years ago in a collision that involved marijuana.

"Fully behind them, they are excellent," said Thomson. "Right now, when it comes to impaired driving by drugs, the police have very little teeth, specifically in Ontario, they have very little enforcement capability right now. [This is a] big step forward."

According to Thomson the legislation is more pressing than ever with the impending legalization of marijuana.

Nevertheless, the OPP said it's not just in the look-out for people under the influence of marijuana but any drug, both prescribed and illicit drugs.

According to the figures released by the Office of the Chief Coroner, 39 percent of drivers killed on Ontario's roads in 2013 had either drugs or a combination of drugs and alcohol in their system.

The new penalties enforced Sunday are part of the Making Ontario's Roads Safer Act introduced last year. In addition to these measures, impaired driving can lead to criminal charges which could ultimately result in a loss of licence, additional fines and jail time of up to five years.