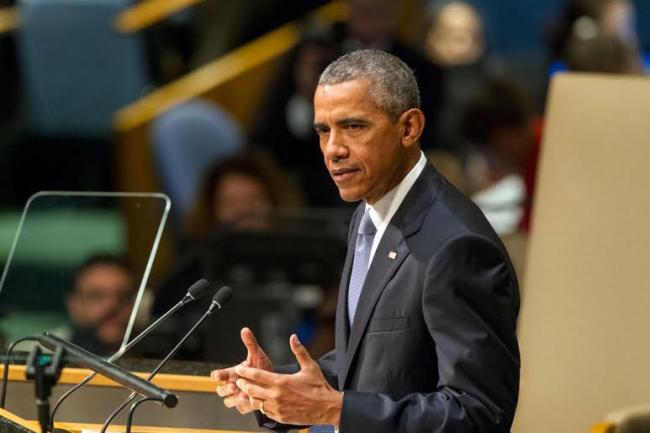 India Blooms News Service | | 24 Jun 2016, 08:20 pm
#Barack Obama, #US President, #US, #Brexit
Washington, June 24 (IBNS): US President Barack Obama on Friday said his nation 'respects' the decision given by the people of Britain on the issue of Brexit.

"So too is our relationship with the European Union, which has done so much to promote stability, stimulate economic growth, and foster the spread of democratic values and ideals across the continent and beyond. The United Kingdom and the European Union will remain indispensable partners of the United States even as they begin negotiating their ongoing relationship to ensure continued stability, security, and prosperity for Europe, Great Britain and Northern Ireland, and the world," he said.

In a historic day of geo-political bloodbath, Britain on Friday chose to leave the European Union after a majority of 52 percent voted in its favour in a referendum on Thursday, severing a tie since 1973, thus forcing Prime Minister David Cameron who had put his neck on the line by an aggressive pro-EU campaign, to resign.

The European Unity forged since the World War II also got a body blow with the decision of Britain while repercussion was felt in other European countries too especially emboldening groups like the resurgent far-right National Front party of France.

While Prime Minister David Cameron announced that he would resign in three months, the financial markets across the world nosedived after the results of the referendum that is now famously called Brexit.

However, London has overwhelmingly voted in favour to remain in the 28-member European Union (EU). So did Scotland and Northern Ireland.

The former London Mayor Boris Johnson, who is also seen as Cameron’s possible successor as party leader, had led the Leave campaign, along with several serving Cabinet members.

David Cameron announced on Friday to resign in three months as the British Prime Minister.