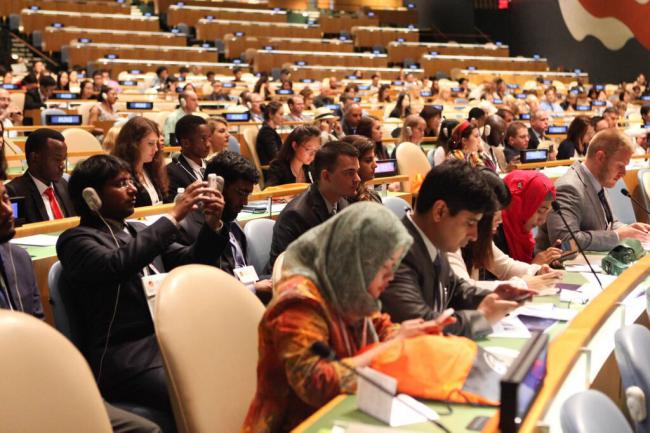 India Blooms News Service | | 25 Jul 2015, 10:03 am
#New York: Winners of essay contest on UN sustainability agenda honoured
New York, Jul 25 (IBNS): Secretary-General Ban Ki-moon on Friday welcomed the 70 winners of the United Nations-sponsored Many Languages, One World contest who wrote â€œinspiredâ€ essays in languages not their own about a new sustainable development path that will lead to an end to poverty and a life of dignity for all.

“You were asked to do something inspired and challenging – to write an essay in an official United Nations language that is not your own,” the UN chief said in a message delivered to the Global Youth Forum by Cristina Gallach, the Under-Secretary-General for Communications and Public Information.

From a pool of over 1,200 entrants, the 70 students, from 42 countries representing 60 universities, were selected as winners of the essay contest, which was organized by ELS Educational Services, Inc., and the United Nations Academic Impact (UNAI).

The Many Languages, One World, contest challenged college and university students from around the globe to write an essay examining the post-2015 global development agenda of the United Nations.

The essays were to be submitted in one of the six official United Nations languages, which was not the student’s first-language, or the principal language of instruction in their primary or secondary education.

The official languages of the United Nations are Arabic, Chinese, English, French, Russian and Spanish.

More than 3,500 people from 130 countries took part in the initial phase of the contest. The winners were invited to New York and given the opportunity today to speak in the UN General Assembly Hall.

In his remarks, the Secretary-General noted the importance of multilingualism, which “allows us to come together across diverse societies to work cooperatively to improve the state of the world.”

“This is, of course, is the central mission of the United Nations, and it is one that depends upon multilingualism,” he said.

Describing the year 2015 as “a special time,” Ban said this year represents “a historic opportunity to forge a new sustainable development path that will lead us to an end to poverty and a life of dignity for all.”

The students wrote about such topics as inclusive and equitable education for all; healthy lives and well-being for all ages; full and productive employment and decent work for all; and the importance of human rights and holding institutions accountable.