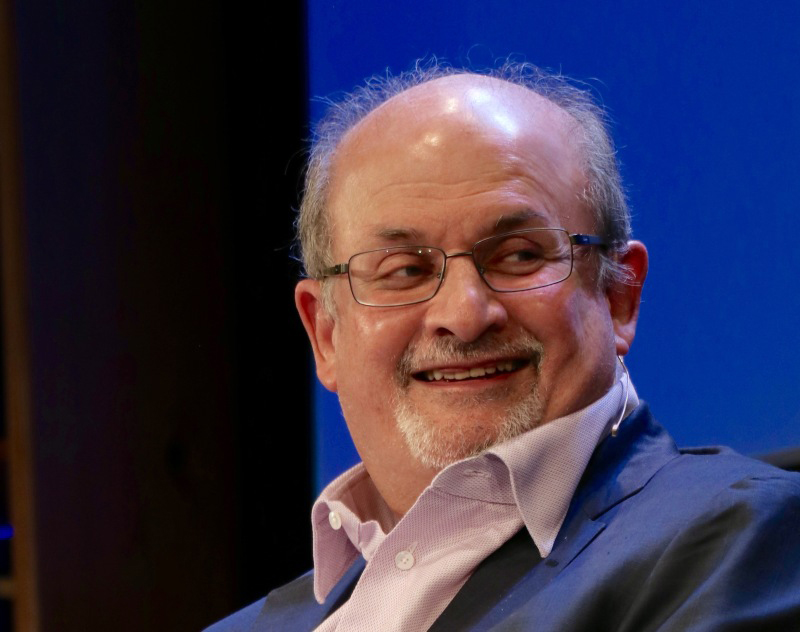 After six years under police protection and living in safe houses, author Salman Rushdie appears in London in his first pre-announced public appearance since the fatwa was issued. Rushdie, who was attacked at an event in the US city of New York on Friday, is currently on a ventilator. "Salman will likely lose one eye; the nerves in his arm were severed; and his liver was stabbed and damaged," his agent said, quoted BBC.

The attack occurred when he was about to deliver a lecture.

Salman Rushdie's agent has said "the news is not good" after the author was stabbed at an event in New York state, BBC reported.

He was attacked on stage, and is now on a ventilator and unable to speak, Andrew Wylie said in a statement, adding that the author may lose one eye, the British media reported.

The author's writing led to death threats from Iran in the late 1980s.

According to an Associated Press reporter, who witnessed the incident, a man stormed into the stage at the Chautauqua Institution and began punching or stabbing Rushdie as he was being introduced.

The author was taken or fell to the floor, and the man was restrained, said the reports.

The man who stabbed "Midnight's Children" author was identified as 24-year-old Hadi Matar from New Jersey.

Islam must not be exempted from the critical scrutiny that applies to all other religions. Islam must go through an enlightenment process by questioning inhuman, unequal, unscientific & irrational aspects of the religion. #FreeSpeech

Rushdie’s book “The Satanic Verses” has been banned in Iran since 1988, as many Muslims consider it to be blasphemous. The Satanic Verses portrayed a fictionalized version of Prophet Mohammed while the interpretation of the Quran angered the Muslims worldwide.

A year later, Iran’s late leader Ayatollah Ruhollah Khomeini issued a fatwa calling for Rushdie’s death. He also declared a bounty for anyone who would execute it.

Rushdie lived under death threat until 1998 till the Iranian government declared that it would no longer enforce the fatwa. However the threat continued and the fatwa remained active. Even eight years after the announcement of a bounty on his head, the Iranian revolutionary 15th Khordad Foundation increased the bounty to $2.5 million. Since then the bounty on his head only increased.

For nearly six years since the controversy broke out Rushdie lived under police protection in safe houses.

Rushdie's visit to India in 1999 after he was granted a visa by the Indian government to visit his country of birth (he was Mumbai born), had sparked protests as well.

Describing the attack as "appalling", White House National Security Adviser Jake Sullivan tweeted: "We’re all praying for his speedy recovery. And we’re thankful to good citizens and first responders for helping him so swiftly."

"I am really shocked. I never thought it would happen. He has been living in the West, and he has been protected since 1989. If he is attacked, anyone who is critical of Islam can be attacked. I am worried," said Author Taslima Nasreen.

Salman Rushdie on ventilator, may lose an eye: Report

Celebrated author Salman Rushdie, whose "Satanic Verses" drew death threats in the 1980s, is on ventilator after a New York stabbing incident.

Rushdie's agent told the media that the nerves in the novelist's arm were severed, his liver was stabbed and damaged in the Friday attack at an event here.

In an email to international media, Andrew Wylie, his book agent said: "The news is not good.

"Salman will likely lose one eye; the nerves in his arm were severed; and his liver was stabbed and damaged."