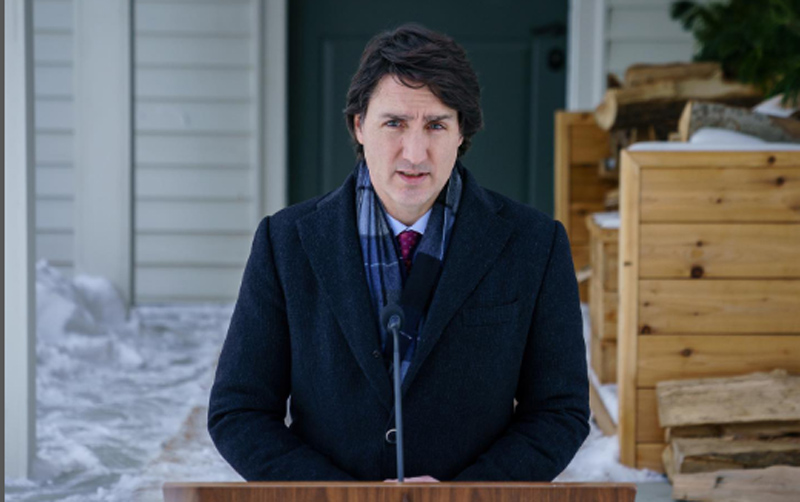 Canada’s support for Ukraine remains steadfast. I reiterated that during today’s meeting with G7 leaders, which President @ZelenskyyUa and I joined together from Kyiv. We spoke about the current situation and our coordinated response.

“As Russia continues its ongoing illegal and unjustifiable war against Ukraine, Canada will continue to be there to support Ukraine and its people," Trudeau was quoted as saying by the official website of the PM.

"I would like to thank President Zelenskyy for hosting this visit, but also more importantly, for his leadership," he said.

"Together with Ukrainians, President Zelenskyy is defending the values at the very heart of democracies. His courage and the courage of Ukrainians is inspiring, and we will continue to do everything we can to make sure Ukraine gets the support it needs," the Canadian leader said.

Earlier today, the Prime Minister, Deputy Prime Minister, and Minister of Foreign Affairs participated in a flag raising ceremony to mark the re-opening of the Canadian Embassy in Ukraine.

Ambassador Larisa Galadza, together with a team of additional staff members, will resume diplomatic operations in Kyiv, Ukraine as part of a gradual restoring of Canada’s full diplomatic presence and services.

Earlier today, @CAFreeland, @MelanieJoly, and I arrived in Ukraine. We met with President @ZelenskyyUa and visited Irpin. We saw the destruction caused by Putin, but we also saw the strength & courage of Ukrainians – and as they continue to fight, we’ll continue to support them.

Until further notice, consular and immigration services will continue to be provided in Poland and many other European cities in the region, read the statement issued at the official website of the PM.

"Russian forces have terrorized and killed civilians and destroyed homes and neighbourhoods," it said.

In a bilateral meeting, the Prime Minister and President Zelenskyy discussed the historic partnership between their two countries, the situation in Ukraine, and the need for additional international support – including humanitarian, financial, and military assistance.

The two leaders also discussed global efforts to impose severe and lasting sanctions on Russia in response to President Putin’s invasion of Ukraine.

During his visit, Prime Minister Trudeau and President Zelenskyy participated in a G7 Leaders’ meeting.

Together with leaders from the G7, the Prime Minister and President commemorated the end of the Second World War in Europe.