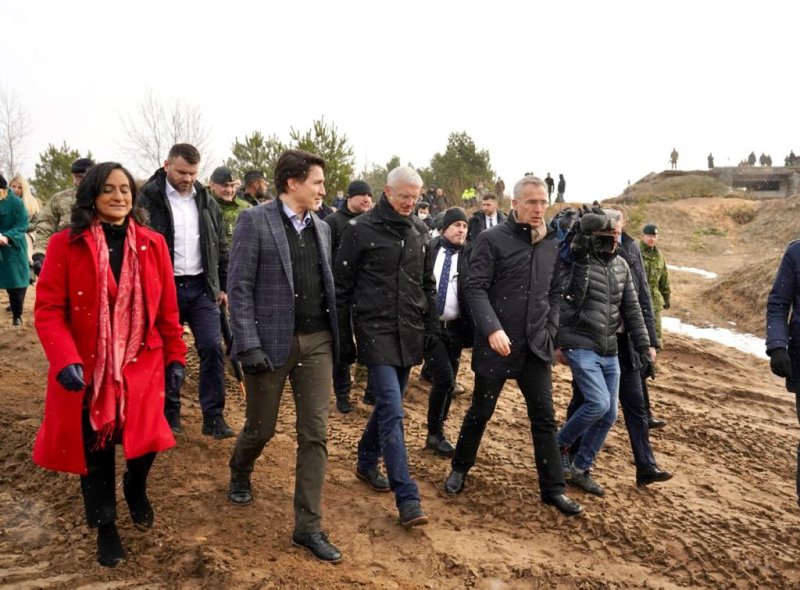 Prime Minister Justin Trudeau on Tuesday announced during his visit to Latvia the early renewal of Canada's military contribution to NATO's mission, known as Operation Reassurance one year before it was scheduled to end.

Today, we announced that we're renewing Operation REASSURANCE – a mission that is part of NATO's assurance and deterrence efforts in Eastern Europe. It was set to expire next year but, in light of the situation in Europe, we've decided to renew the mission ahead of schedule.

Trudeau was joined with Spanish Prime Minister Pedro Sanchez and Latvian Prime Minister Arturs Krišjānis Kariņš as they visited the troops on alliance's base and training range at Adazi, outside Latvia's capital Riga and met with NATO Sec. Gen. Jens Stoltenberg to discuss how allies can prevent the war of Russian invasion of Ukraine from spreading.

Although the mandate for the deployment of hundreds of Canadian soldiers in Latvia was slated to expire in 2023, Canada's federal cabinet extended it indefinitely in response to Russia's invasion of Ukraine.

This move was welcomed by Stoltenberg on Tuesday when he and the three prime ministers spoke to the media after their meetings.

Trudeau also reaffirmed that Canada would stand in solidarity to support Ukraine and the Ukrainian people, as well as democracy and human rights everywhere.

The troops taking part in this mission are defending Latvia and Eastern Europe. They're also defending all NATO allies, including Canada – and our freedom, security, and democracy. We met with some of them at Ādaži Military Base today, and thanked them for their service. pic.twitter.com/iWSrdC0MX1

As a leader of the NATO battle group in Latvia, Canada plans to reinforce it with an artillery battery, bringing the total contingent to roughly 660 soldiers.