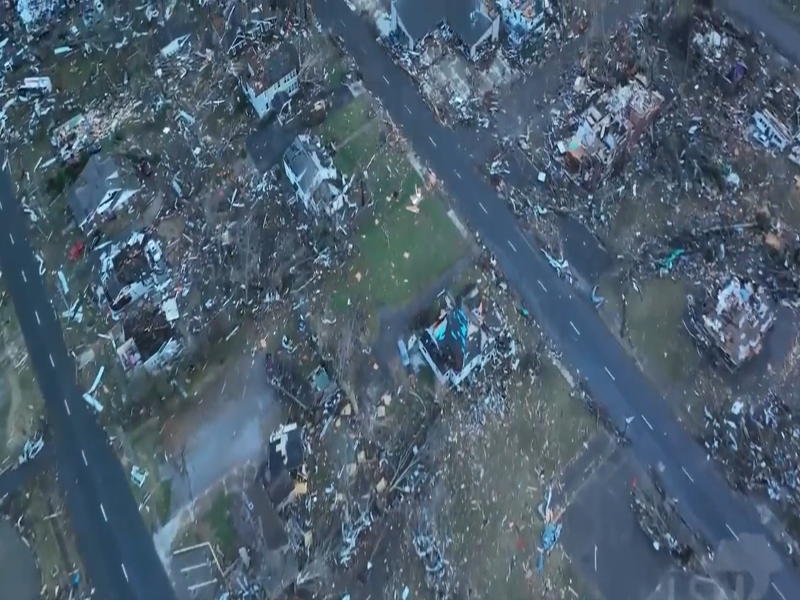 At least 70 people are feared dead in the tornadoes that ripped Kentucky and the death toll may exceed 100, Kentucky governor Andy Beshear said.

The tornado caused massive destruction in the western Kentucky town of Mayfield where houses and buildings were "ripped apart, and twisted metal, shattered tree limbs and bricks scattered across streets, according to pictures and videos shared on social media," according to the AFP report.

Initially, Beshear said, the administration was pretty sure that at least 50 Kentuckians would lose their lives in the tornado but now that number is north of 70. 'It may in fact end up exceeding 100 before the day is done," he added.

This has been one of the toughest nights in Kentucky’s history, with multiple counties impacted and a significant loss of life. I have declared a state of emergency and submitted a request to @POTUS for an immediate federal emergency declaration. https://t.co/KmMOl95t1N
1/2 pic.twitter.com/Xj5DgTZp1Z

The tornado caused multiple fatalities at an Amazon warehouse in Illinois that suffered "catastrophic damage" with around 100 people trapped inside, AFP reported.

A country official said the tornado "pretty much destroyed" a nursing home in the Arkansas town of Monette, AFP reported.

Towns in Missouri and Tennessee were also hammered by some of the most powerful tornadoes to hit the area in years.

President Joe Biden tweeted that the massive storms had inflicted an "unimaginable tragedy" on the area and promised to provide all needed federal aid.

A woman, who was in the Kentucky town of Dawson Springs when the tornado hit, told CNN that the storm lasted for three or four seconds but caused unbelievable damage. The storm hit at 70 miles northwest of Mayfield.

One tornado, which first touched down in Missouri, smashed along the ground for over 200 miles in Kentucky, Governor Beshear said, according to the report.

The governor announced a state of emergency before midnight and said dozens of search and rescue officials had been deployed.

Around 200,000 homes in Kentucky and Tennessee were left without power, according to PowerOutage.com.