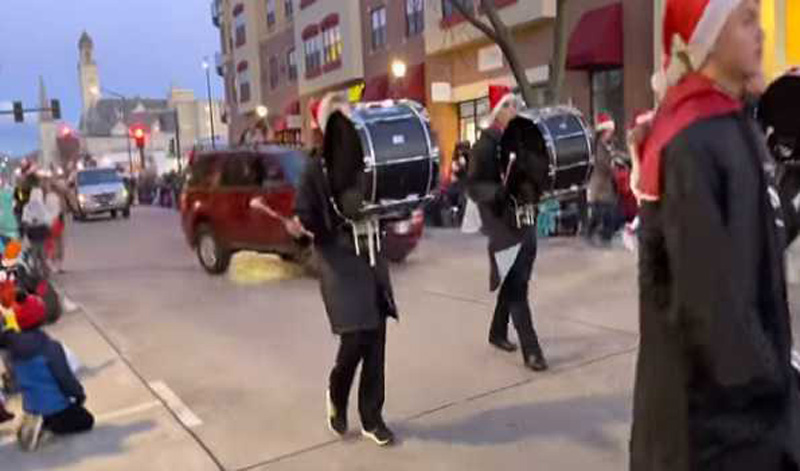 Washington/UNI/Sputnik: Several people were killed and over 20 people, including a dozen children, were injured when a car plowed into the Waukesha Holiday Parade in Wisconsin, local police and fire authorities confirmed.

"The vehicle struck more than 20 individuals, some of the individuals were children and there are some fatalities as a result of this incident," Waukesha Police Chief Daniel Thompson told reporters on Sunday evening without providing any additional information on fatalities.

The Waukesha Holiday Parade was live-streamed on the city’s Facebook page on Sunday. A video from the parade showed a car driving through the crowd and hitting people on its way. Local media said that more than one person was killed and multiple others were injured. There were also reports of shots having been fired from the car window.

"An officer did discharge his weapon at the suspect's vehicle to try to stop the vehicle. No bystanders were injured as a result of the weapon discharge," Thompson specified at the Sunday press conference adding that "we do not believe that there were any shots that were fired from the vehicle."

The police chief said that the search for the suspect's vehicle was over and the scene was safe and secure.

"We do have a person of interest in custody at the moment," Thompson said.

Pray for the people that got hurt at Waukesha Christmas parade pic.twitter.com/75yuSwlhUG

Speaking at the same press conference, Fire Chief Steve Howard said that 11 adults and 12 children were taken to the hospital with injuries after the car incident and there were some fatalities.

The US Federal Bureau of Investigation (FBI) is providing assistance to Waukesha law enforcement in investigating the tragic car incident at a local holiday parade, an FBI spokesperson told Sputnik.