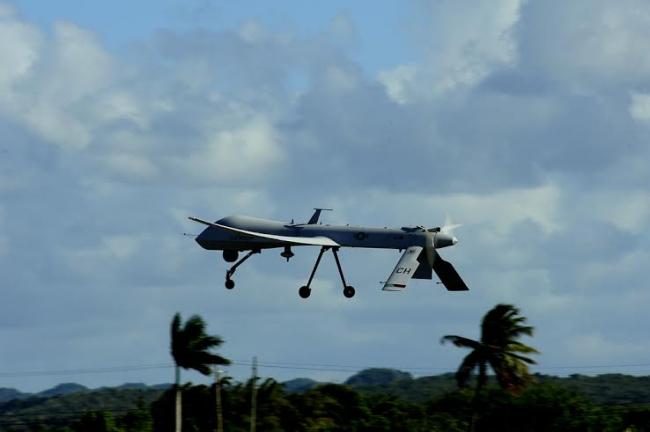 India Blooms News Service | | 30 Apr 2015, 12:28 pm
#UN rights experts welcome
New York, Apr 30 (IBNS): A group of United Nations independent experts on Wednesday welcomed the announcement by the United States Government of a review of two counter-terrorism operations involving the use of drones, while stressing the need for transparency and accountability.

“We welcome President Obama's apology to the families. All innocent victims of drone attacks deserve such an apology, regardless of their nationality,” the experts said in a statement released on Wednesday by the Office of the UN High Commissioner for Human Rights (OHCHR).

He said, “Authorities are often obliged to plan these sorts of counter-terrorism operations on the basis of factual hypotheses that cannot be adequately verified due to incomplete or conflicting information.”

They noted that the United States Government acknowledged the accidental killing of four individuals in counter-terrorism operations conducted in January in the border regions of Afghanistan and Pakistan involving the use of drones, following declassification of information related to the operations and disclosure to the public but added that it was important to go beyond that approach to such incidents.

“Purely ex post facto assessments into what has possibly gone wrong are important for the purposes of evaluating impact, identifying lessons learnt and putting in place operational arrangements to mitigate against repetition,” the experts noted.

They added, “However, they are not enough for a finding of State, as well as individual, responsibility.”

The experts, known as Special Rapporteurs, are part of the 'Special Procedures' of the Human Rights Council, which is the general name of the Council's independent fact-finding and monitoring mechanisms that address either specific country situations or thematic issues in all parts of the world.

Their statement expressed hope that the commitment made by the US Government will provide new impetus towards a concerted response by the international community to the unresolved controversies surrounding the use of armed drones.

“Any plausible allegation of killing of or serious injury to civilians triggers the obligation to investigate,” said the experts' statement.

The experts added that whenever civilian casualties are suspected, a proper procedure should be in place to ascertain the facts and make them public with a view to securing accountability and reparations for the victims.

Among the experts, who work on an individual, voluntary, unpaid basis and are not UN staff, were the Special Rapporteurs on the promotion and protection of human rights and fundamental freedoms while countering terrorism; on torture and other cruel, inhuman or degrading treatment or punishment; on extrajudicial, summary or arbitrary executions; and on independence of judges and lawyers.

They stressed that, subject to redactions on the grounds of legitimate national security, their results must be open to public scrutiny, and, where appropriate, adequate reparation to victims and their families must be offered.

“According to internationally recognized legal standards, investigations must be prompt, impartial, independent and exhaustive,” said Juan Mendez, the Special Rapporteur on torture.

“Ultimately, the lawfulness of Government action should be subject to independent and effective judicial review, both at the domestic, and at the international level,” said Gabriela Knaul, the Special Rapporteur on the independence of judges and lawyers.

“The legal framework for maintaining international peace and the protection of the right to life is a coherent and well-established system,” said Christof Heyns, the Special Rapporteur on extrajudicial, summary or arbitrary executions.

He added, “States using drones have an obligation to respect international standards and prevent violations.”

Heyns cautioned against broad and permissive interpretations of the current international rules and standards, while Ben Emerson, Special Rapporteur on the promotion and protection of human rights and fundamental freedoms while countering terrorism, pointed to the need for global unanimity.

“There are a number of legal questions on which there is either no clear international consensus, or where current practices and interpretations appear to need further discussion,” he said.

He added, “Only a legitimate consensus across the international community can pave the way to a sound, ethical and legal response to these questions.”

The experts' statement also stressed that armed drones should be used in a manner that is compatible with international law.