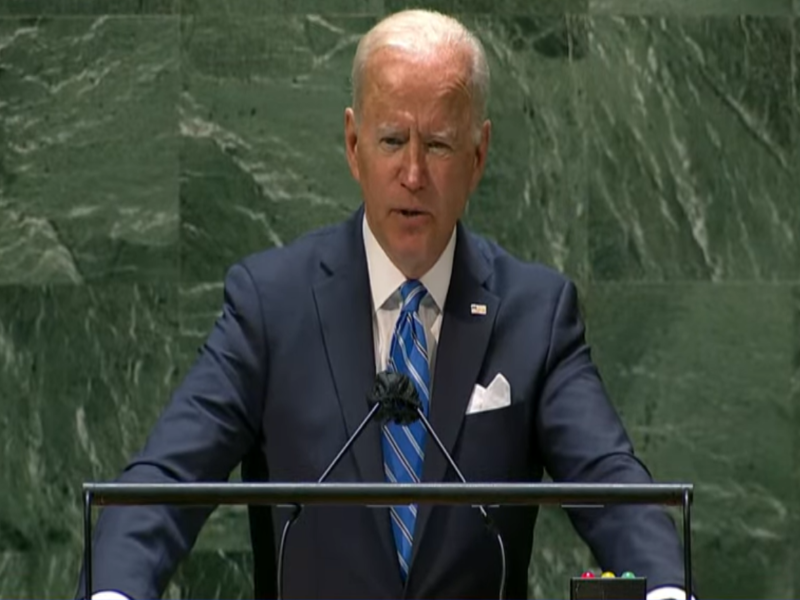 US better equipped, more resilient against terror attacks than 20 yrs ago: Biden at UNGA

New York/IBNS: US President Joe Biden on Tuesday said that his country was better equipped and more resilient compared to 2001 when terrorist attacks or more commonly known as the 9/11 attacks shook the country.

Biden made the remarks during his address at the 76th session of the United Nations general assembly (UNGA).

Referring to the terrorist attacks at the gates of Kabul's Hamid Karzai Airport during the last phase of withdrawal of US forces from Afghanistan on August 26, Biden said, “We must also remain vigilant to the threat of terrorism poses to all our nations emanating from distant regions of the world or in our backyard. We know the bitter sting of terrorism. Last month, we lost 13 American heroes and many Afghan civilians in the heinous terrorist attack at Kabul airport."

The following day, the US had made retaliatory strikes against the Islamic State of Khorasan (IS-K), killing the planner suspected of plotting more attacks.

He asserted that the US was not the country it was 20 years back.

“US is not the same country it was when it was attacked on 9/11, 20 years ago. Today we are better equipped to detect and prevent terrorist threats and we are more resilient in our ability to repel them and to respond,” he said.

“We know how to build effective partnerships to dismantle terrorist networks by targeting their finances and support systems, countering their propaganda, preventing their travel as well as disrupting imminent attacks. We will meet terrorist threats that arrive today and in the future with a full range of tools available to us including working in cooperation with local partners so that we need not be so reliant on large-scale military deployments,” Biden said during his address.

Apparently referring to power tussle in the Indo-Pacific region, Biden told the United Nations General Assembly that the United States does not seek a "new Cold War".

"The United States is ready to work with any nation that steps up and pursues peaceful resolution to share challenges even if we have an intense disagreement in other areas," he said.

Biden underscored that his country is now opening an 'era of relentless diplomacy' as it ended the 20 years of conflict in Afghanistan with the withdrawal of the troops.

"We have ended 20 years of conflict in Afghanistan, and as we close this period of relentless war, we are opening to a new era of relentless diplomacy.

"The mission must be clear and achievable, undertaken with informed consent of the American people and whenever possible in partnership with our allies," he added.

"It should not be used as an answer to every problem we see around the world," said Biden whose role has been much criticised for withdrawing troops from Afghanistan, which led to an unprecedented crisis in the South Asian nation.