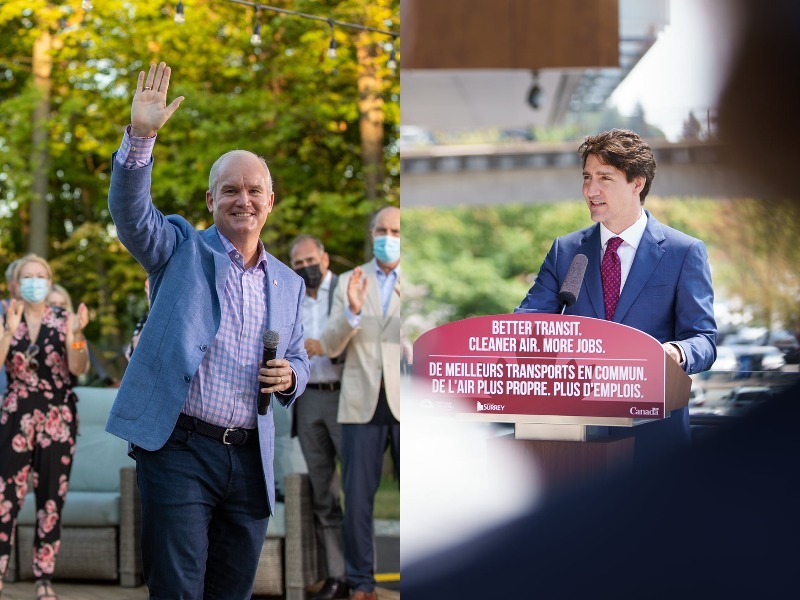 Ottawa: Canadian Prime Minister Justin Trudeau might have called a snap poll to clinch a parliamentary majority after a hamstrung minority government for two years, but his gamble could prove counter-productive, induced by voter fatigue and public dissatisfaction with an election amid the pandemic.

With the Sept 20 election date just three days away, Trudeau seems to be skating on thin ice following the announcement of polls two years early in the hope that his center-left Liberal Party of Canada will garner enough seats in Parliament and stop dependency on the support of opposition to pass legislation.

The Liberals were placed second in terms of likelihood to win the election while the most recent opinion polls show Trudeau's party going neck and neck with the opposition Conservatives led by Erin O'Toole.

Experts predict voter turnout as a major factor for Trudeau amid fears of a low turnout owing to the pandemic fatigue and possibilities of longer queues at the booths to adhere to the social distancing compulsion.

According to a Nanos Research telephone survey of 1,200 Canadians for CTV NEWS on Wednesday, public support for the Conservatives stands at 31.2 percent, the Liberals at 30.5 percent and the New Democrats at 21.4 percent.

According to pundits, if the trend continues and reflects on the actual result, it will lead to a deadlock and won't even aid in the formation of a stable minority government. 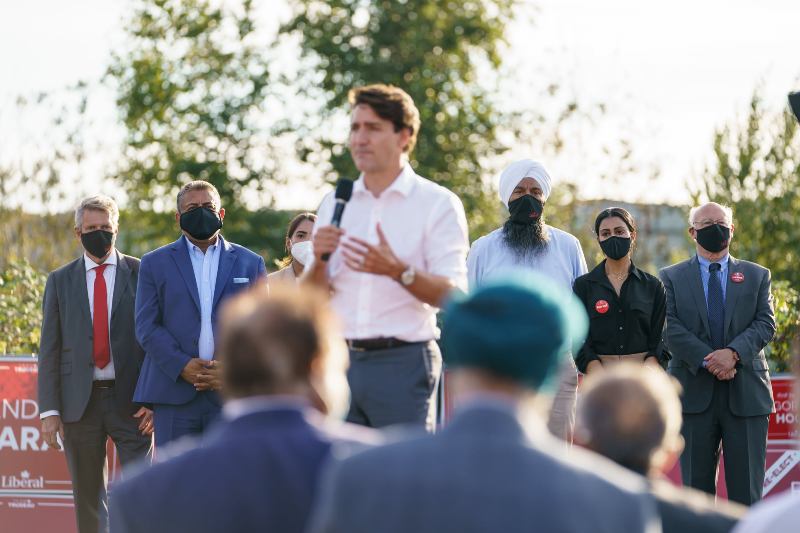 The vote is set to take place on Sept 20. It was announced after the Parliament was dissolved by Governor-General Mary Simon, representative of Canada's head of state, Queen Elizabeth II.

The Parliament consists of 443 seats, but voters will exercise their rights for 338 seats contested by MP or members of parliament to the House of the Commons. The remaining 105 seats are reserved for senators.

In order to form a majority government, a singular party must win 170 seats. An MP's term in office is normally four years. If a single party fails to win a majority, the one with the largest number of seats in the Commons is traditionally called on to form the government.

According to Abacus Data, a Canadian polling and market research firm based in Ottawa, Ontario, 62 percent of Canadian adults have identified 'Cost of Living' as the number one issue ahead of the polls. The company had surveyed 1,500 Canadian adults between July 13 and 19, 2021. Access to Healthcare and Climate Change and Environment make up the second and third issue with 47 and 46 percent respectively.

Twenty-six percent of Canadians are worried about Cost and Availability of Medicines, 31 percent about Government Spending and Deficits- making them the 10th and ninth most identified issues. 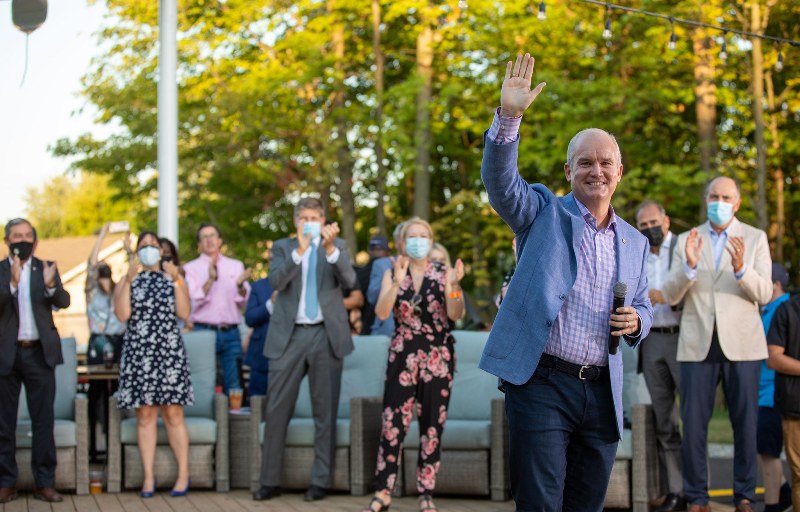 Erin O'Toole during the first week of campaign. Photo: facebook.com/erinotoolecpc

He attributed it to Trudeau's reckless spending and massive debts.

A statement from the opposition leader read: "It's troubling that Justin Trudeau seems to not care about the sky-rocketing cost of living that is being imposed on Canadians through inflation."

Inflation rates reached 3.7 percent in July and broke an 18-year-old record with 4.1 percent while doing this news (in Second week of September), as locals witnessed the prices of groceries, clothes and transport increase.

The Prime Minister, however, has said that Canada is "bouncing back ... from an extreme crisis of this pandemic that has caused a lot of disruption and yes, is increasing prices," while the left-leaning New Democrats said the "people can't afford Justin Trudeau's empty promises anymore."

Trudeau, in power for six years now, has accumulated a record debt and the highest budget deficits since World War Two, according to reports. The Prime Minister is promising more investments if he wins.

On the other hand, O'Toole told reporters in Saguenay, Quebec, that if elected, his government would reduce inflation by cutting the pace of spending and allowing more competition in the wireless and internet markets.

Even though he has promised to not make cuts while balancing the budget within a decade, O'Toole hasn't said how he plans to do it, yet.

According to The Economist, housing prices in Canada have outgrown the same in several other countries. Since 2015, the costs of homes in Vancouver have increased on average by 44 percent, while in Toronto they swelled by 38 percent.

During this time, London has witnessed a jump in housing prices by 9 percent, New York by 13 percent and Tokyo by 6 percent.

The average selling price of a home in Toronto is now just over C$1m (USD 790,925) and in Vancouver, C$1.2m (USD 949,110). While this may augur well for sellers, it is a massive setback for the younger Canadians looking to buy a house and is likely to play a vital role in the upcoming polls.

Jagmeet Singh and the NDP

With just over 20 percent winning likeability in the upcoming polls, New Democratic Party (NDP) leader Jagmeet Singh is unlikely to become the new Prime Minister of Canada. However, he is likely to have an impact as a kingmaker. 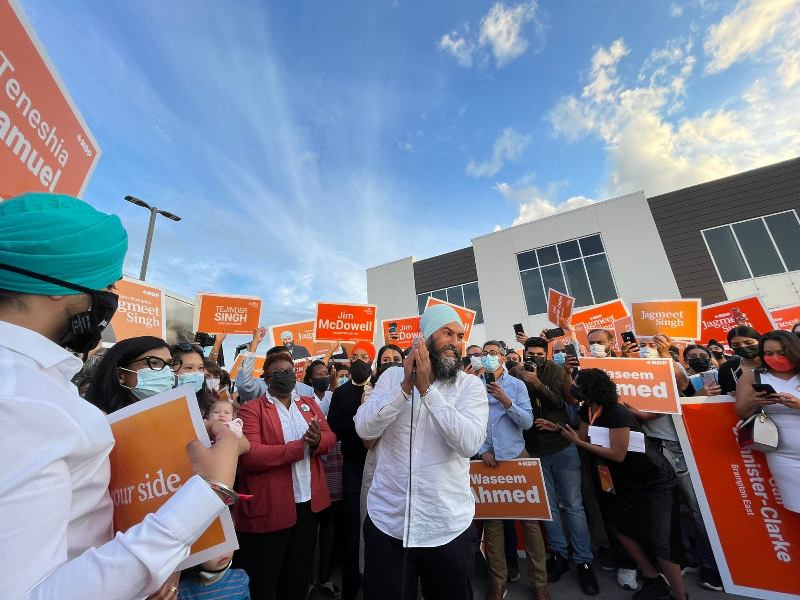 With Trudeau currently placed in second spot, following Conservative leader Erin O'Toole, and less than one percent separating the two, Singh is looking to widen the gap.

The NDP leader's campaign has gained prominence with promises such as the availability of prescription drugs, cutting emissions to 50 percent of 2005 levels by 2030, waive off student-loan debt and tackling inflated housing and rental markets.

Meanwhile, Singh has faced protests from the Indian diaspora in Vancouver for remaining silent on attacks on Hindu community in the country.

According to reports, several protesters have said that they feel unsafe under his leadership.

Apart from these, here are some key issues that are likely to play a part in the elections:

An offensive commenced between Israel and Palestine (Hamas) in the month of May, spreading tension among the two communities across the globe, and Canada wasn't immune to this either. Even as Egypt managed to broker a ceasefire between the two warring communities, several places in Canada saw anti-semitic demonstrations.

"According to the Anti-Defamation League Center on Extremism’s preliminary data, more than 17,000 tweets using variations of the phrase, 'Hitler was right' went up between May 7 and May 14. The ADL’s analysis of Facebook, Twitter, TikTok and Instagram found 'explicit praise for Hitler, promoting tropes about Jewish control and demonizing all Jews' including posts that used a racial epithet for Jewish people and called for 'race war now'," read a Global News report.

And even though Prime Minister Justin Trudeau acknowledged the troubling rise of anti-Semitism across Canada, said that it needs to stop, the data looks grim.

Anti-Semitic incidents in May 2021 alone was more than that recorded in the whole of 2020.

Is it just me, or is there a rise in antisemitism going on right now in Canada? https://t.co/EAydGVbF9z

Randal F. Schnoor, a professor at York University’s Koschitzky Centre for Jewish Studies, said: “Anti-Semitism is a small but can be a quite vocal and disturbing minority in Canada.”

The problem for Trudeau, even with all the apologies and recognition, is that the cases have increased, thus highlighting the failure of his government in tackling the issue.

Prime Minister Justin Trudeau's China policy is ambiguous, to say the least. On one hand, his government is busy deflecting charges that it is lenient on China and on the other, it fails to call out Beijing on important issues.

The Liberals have been critical about Beijing's ‘hostage diplomacy’ and ‘arbitrary detentions’ — and are very vocal about China's treatment of Uighurs in Xinjiang and locals in Hong Kong- where it has imposed the draconian and controversial National Security Law.

Paul Evans opined in his piece for East Asia Forum: "On the other hand, it [Canada govt.] shies away from blanket criticisms of the CCP and rhetorical overreach. Prime Minister Trudeau and his ministers state that they do not see China as an adversary and instead frame their objectives through a mixed bag of ‘Cs’ — competition, confrontation, cooperation, collaboration and coexistence.

"The government has clearly moved beyond the engagement approach it embraced as late as 2018, but is yet to articulate a new strategy like the United States’ ‘strategic competition’. It also prevaricates on whether it prefers to frame the region as ‘Asia Pacific’ or ‘Indo-Pacific’."

"This is partly due to an aversion to overarching strategies in any matter of foreign affairs, and the sensitivities around the 3M crisis that puts Ottawa in the middle of a high-stakes, zero-sum US–China conflict. It also reflects the difficulty a minority government faces in refurbishing or replacing an engagement philosophy that no longer has broad public support or meets the complexities of an increasingly assertive and repressive China under President Xi Jinping," Evans added.

China took into custody Canadians Michael Spavor and Michael Kovrig in December 2018, following the arrest of Meng Wanzhou by Canadian authorities. It is considered an act of hostage diplomacy and is still unresolved.

Meng was the chief financial officer (CFO) of the Chinese telecom giant Huawei, founded by her father Ren Zhengfei. She faced arrest at the Vancouver International Airport by the Royal Canadian Mounted Police at the request of the USA. On January 28, 2019, the US Department of Justice (DOJ) announced financial fraud charges against her.

On December 10, 2018, Kovrig was arrested in Beijing around the same time as Spavor. They were charged with espionage endangering China's national security.

The failure to get the Canadians released and bring them back safely has put a question mark on Trudeau's diplomatic abilities.

Meanwhile, according to political observers, the turnout of voters is going to be an important factor for Trudeau.

While opinion polls are mostly indicating a cliffhanger, low voter turnout may go against Trudeau and work for the Conservatives whose supporters are more consistent voters traditionally.

"Turnout is going to be everything," said Darrell Bricker, chief executive of Ipsos Public Affairs, speaking to Reuters.

"It's not about convincing people they should think about voting for you anymore. It's about getting the people who are committed to voting for you out to vote," he told the wire service.