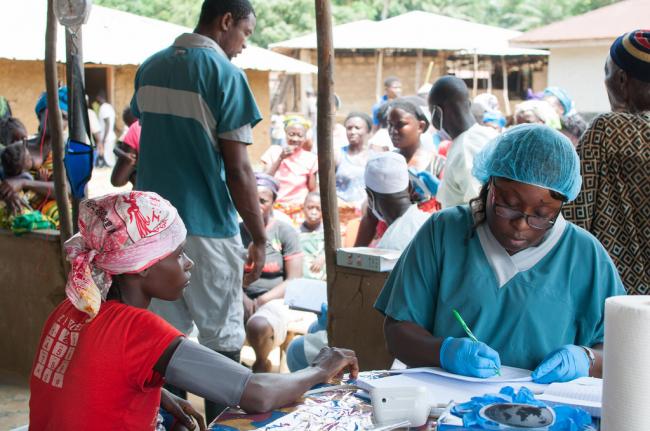 Washington: Ban says, last mile of Ebola struggle may be most difficult

India Blooms News Service | | 18 Apr 2015, 08:59 am
#Washington: Ban says, # last mile of Ebola struggle may be most difficult
New York, Apr 18 (IBNS): While there has been important progress over recent months, the Ebola epidemic remains a pressing challenge, United Nations Secretary-General Ban Ki-moon said on Friday, stressing that on the road to eradicating the scourge the â€œlast mileâ€ may be the toughest.

“Our Marathon effort has been a success,” Ban told a special high-level event on Ebola convened as part of the World Bank's annual spring meetings in Washington, D.C.

However, “too many lives have been lost. Families, communities and nations have been devastated,” he said.

He added, “When we reach zero cases, we must maintain our response capacity for at least a year.”

In connection with the event, the World Bank announced that it would provide at least $650 million during the next year and a half to help the most-affected countries – Guinea, Liberia and Sierra Leone – recover from the social and economic impact of the outbreak. The new pledge brings the World Bank's total financing for Ebola recovery to $1.62 billion.

“Many of us have acknowledged that the international community was slow to react to Ebola. Let's show that we have learned this lesson by supporting an effective and sustainable recovery that also prepares these countries – and the rest of the world – for the next pandemic,” said World Bank Group President, Jim Yong Kim.

Echoing that sentiment, Ban called on the international community to continue strengthening surveillance and community engagement. He commended Presidents and governments of the affected countries for showing leadership and communities for adopting safe and dignified methods of caring for the sick and burying the dead.

“We have seen multilateralism at its best. I thank the many governments, local and international NGOs and, in particular, the brave doctors and nurses working on the front lines,” the UN chief said.

As a result, there has been a significant decline in new Ebola cases. Liberia has only recorded one case in the past two months. And the outbreak has “shrunk considerably to a narrow belt” along coastal Guinea and Sierra Leone.

“These efforts must also recognize the fragility of these countries' transitions from past conflicts and instability to sustainable peace and development,” continued Ban.

Women, men and children need to have safe and affordable access to clinics, hospitals and schools. People need jobs and access to markets. Affected communities, the bereaved and orphans need support. People's faith in their governments' ability to serve them must be reinforced.

“These are our building blocks to repair the fabric of communities, economies and societies torn apart by this terrible disease,” the Secretary-General added.

Later at a press conference, Ban thanked the President of the World Bank for organizing the gathering, and commended the leadership of the Presidents of Guinea, Liberia and Sierra Leone.

“This is multilateralism at its height,” he said.

He added, “Just as we helped the affected countries when the outbreak was at its height, we have to stand by them as the outbreak now ebbs.”

Ban said he will convene a high-level pledging conference in New York in July to mobilize resources, financial and technological resources, to help the economic and social recovery in the affected countries.

“Looking forward, I count on the international community to continue to demonstrate generosity and unity of purpose,” he emphasized. “In the meantime there is the urgent unfinished task of getting to zero cases and staying there. I think we can make it.”

According to the latest data from World Health Organization (WHO), some 25,826 people have been infected and 10,704 have died from the Ebola virus.