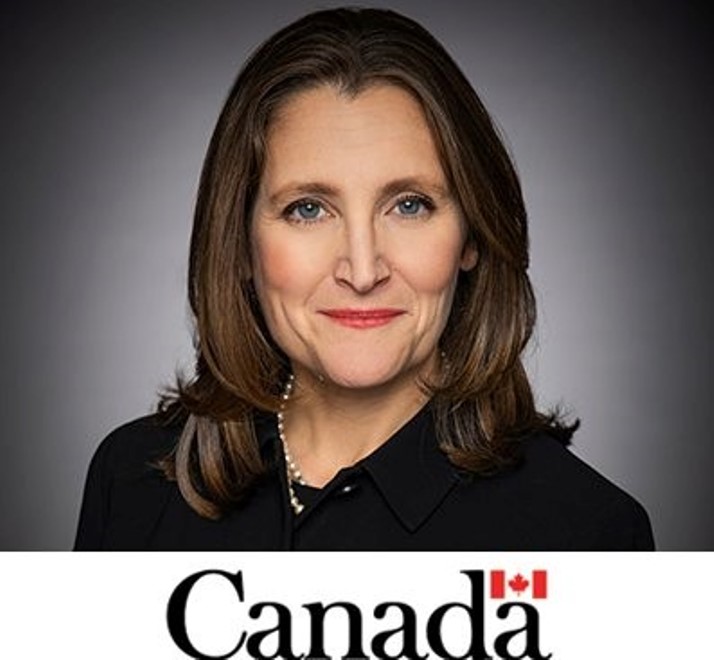 Canada/IBNS: Canada's Finance Minister Chrystia Freeland said in an economic statement that the Liberal government is preparing to spend up to $100 billion to kick-start the post-pandemic economy after the country's record-high deficit projection of more than $381 billion for this fiscal year.

The government's immediate priority continued Freeland is to help Canadians and businesses stay safe and solvent.

The short-term stimulus package valued at $70 billion to $100 billion over roughly three years would be unveiled by the government after a vaccine is distributed and life begins to return to normal.

"When the virus is under control and our economy is ready for new growth, we will deploy an ambitious stimulus package to jump-start our recovery," Freeland said in a statement read in the House of Commons on Nov 30.

Freeland also announced a multi-year plan to build a Canada-wide child-care system to reduce costs for families and encourage more women with kids to join the workforce. This proposed program's cost said Freeland would be covered by the government's plan to levy sales taxes on digital companies to cover the budget deficit.

According to the fiscal update projections, the federal deficit will reach $381.6 billion by the end of March 2021 and depending on the severity of shutdowns and the rate of COVID-19 infections could climb even higher.

The federal government's fall economic statement was ruled out by Conservative Leader Erin O'Toole who said that the plan to provide stimulus to the economy is pointless without first revealing how Canadians will be vaccinated against COVID-19.

"The minister of finance has proven their government has no plan. Without a plan for vaccines, there can be no long-term plan for our economy," O'Toole said in the House of Commons on Monday.

Reacting to Freeland's Fall Economic Statement NDP Leader Jagmeet Singh said the government should go much further and start taxing the revenue of large digital giants that do business in Canada so that it can continue to invest in helping people in a sustained way.