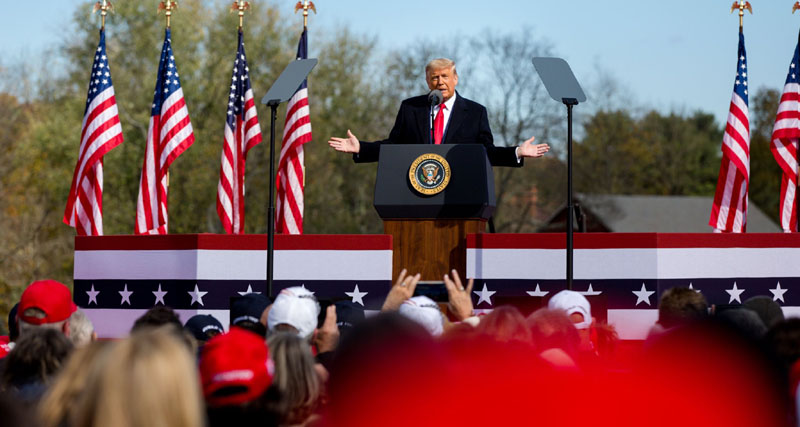 Washington/Xinhua/UNI: U.S. President Donald Trump on Sunday denied a report that he intends to declare victory on election night if it looks like he is ahead.

Trump's remarks came a few hours after news website Axios reported that the Republican incumbent has privately discussed plans to declare victory on election night even though it might take a few days for all mail-in ballots to be counted in some states.

Speaking to reporters after arriving at Charlotte, North Carolina Sunday afternoon, Trump said that was a "false report," while noting that he thinks "it's a terrible thing when ballots can be collected after an election."

The Supreme Court ruled on Friday that Pennsylvania election officials can accept absentee ballots arriving three days after election day, handing Democrats a victory in a legal fight, and prompting criticism from Trump.

The President added he thinks it's "terrible when we can't know the results of an election the night of the election in a modern-day age of computers."

As some states don't allow processing mail-in ballots until Election Day (Nov. 3), such as key swing state Pennsylvania, analysts have cautioned that the winner of the presidential election may still be unknown when election night is over, and the final results could be delayed for days.

A record number of voters are casting their ballots by mail in this election due to the COVID-19 pandemic. According to the United States Election Project, more than 93 million Americans had already voted as of Sunday night, with over 59 million mail ballots.

According to a poll of likely voters conducted by the New York Times and Siena College released Sunday, Democratic presidential nominee Joe Biden holds an advantage over Trump in the key swing states of Wisconsin, Pennsylvania, Florida and Arizona.

In large swing state Florida, Biden is ahead of Trump by 3 points, 47 percent to 44 percent, but the lead is within the margin of error (3.2 percentage points), the poll showed.

In Pennsylvania, Biden's home state, the Democratic challenger is leading by six points, 49 percent to 43 percent, with a 2.4-percentage-point margin of error, according to the poll.

Trump defeated Hillary Clinton in all of the four states in 2016, winning Wisconsin and Pennsylvania by less than 1 percentage point. Flipping any of these states would boost Biden's chance of winning the tight election race.