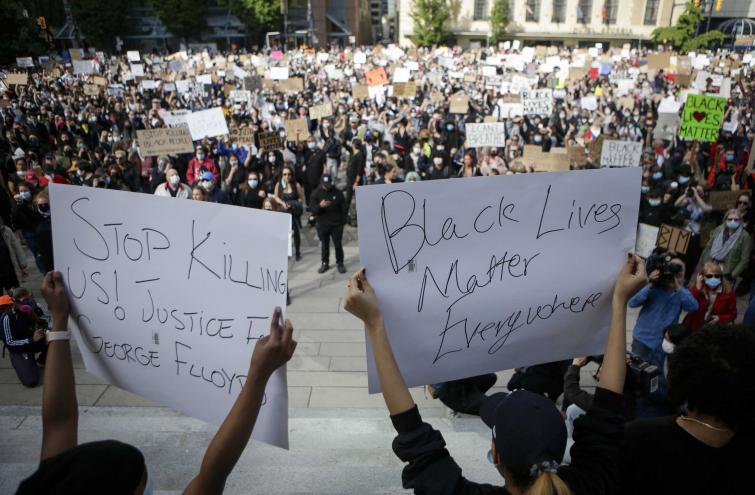 Some 200 protesters arrested in Virginia capital for curfew violations

Washington/Sputnik/UNI: Around 200 anti-racism protesters have been arrested in the US state of Virginia’s capital city of Richmond for curfew violations, Virginia Defenders for Freedom, Justice & Equality movement leader Phil Wilayto said on Tuesday.

Numerous US cities have seen protests over the killing of George Floyd, an unarmed black man who died while in police custody. The protests soon turned into riots complete with arson, looting and clashes with police.
On Sunday, the city of Richmond, which is just two hours driving distance from Washington, DC, imposed curfew after protests became violent in many places.

Hours in handcuffs in buses without bathroom


"About 200 people were arrested. They were marching to protest the 8 pm curfew that was imposed by the mayor that night," Wilayto said.
None of the protesters were beaten or injured, but all arrested persons had to spend several hours in buses before they were transported to the jail, the activist said.

"The buses did not have bathrooms, so the police put a bucket in the back of each vehicle," Wilayto added.

He said police refused to remove handcuffs while people were waiting for release. "When this goes on for hours - in some cases for up to 19 hours, it is really a form of torture and was very traumatic for these young people," he said.

Wilayto was not arrested but helped to release two of his friends who spent a night in detention. "They were released about 8 am this morning on their own personal recognizance, which means they did not have to pay bail money," he said. "I think the city government basically wanted to keep them in jail for the night so they would not return to the streets to protest again."

Americans, who march over George Floyd's death, are protesting against racial and economic disparity, Wilayto said. "These demonstrations represent a reaction to what has seemed like an endless series of killings of black people by police officers, as well as the deep and ongoing racial and economic inequalities that have long characterized US society," he added.

Speaking of ways to prevent violence, the activist urged authorities to eliminate racial oppression, police brutality and poverty. All these things represent roots of the outrage, he added.

"The brutal, deliberate and racist murder of George Floyd was only the most recent police killing of a Black person," Wilayto said, providing several other examples of deadly violence by police officers towards Afro-Americans.
Quarantine turned up a heat.

Economic lockdown, caused by the spread of the novel coronavirus disease (COVID-19), is one of the factors why current protests became so broad and violent, Wilayto supposed. "This closure, while important to address the dangers of the virus, has had a severe economic impact on working people - with a disproportionate toll on Black and other people of color," he said.

The civil rights activist said there is no national leadership at this time that can provide direction to this rebellion, clearly articulate demands and propose a plan of action.

'This will probably happen on local levels, but not on a national level," Wilayto said.

Mass demonstrations against police brutality and racism have erupted across the United States since May 25 after Floyd, an unarmed 46-year-old African American man, died in police custody in Minneapolis, Minnesota. Some protests have turned into riots with violence, arson and widespread looting. The protests erupted after video surfaced showing a police officer Derek Chauvin kneeling on Floyd's neck for more than eight minutes right before he died.