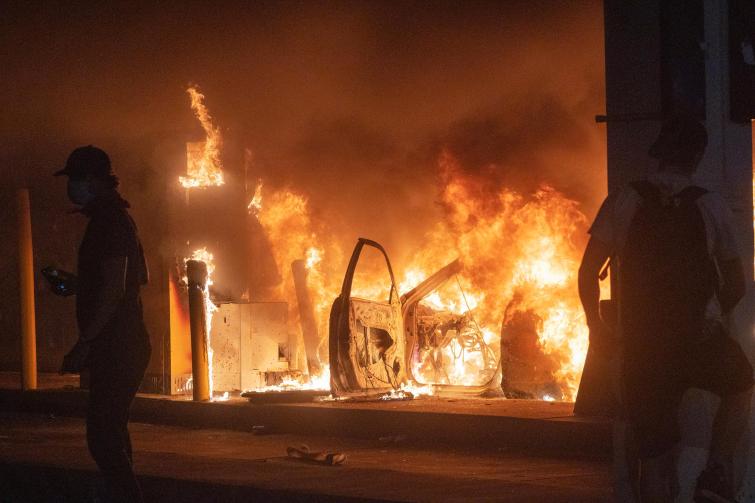 Moscow/Sputnik/UNI: The local authorities in major US cities, namely Los Angeles, Philadelphia and Atlanta, have followed the suit of other cities across the country and imposed curfews on Saturday night following violent protests over the death of African American George Floyd in police custody.

"We will always protect free speech and Angelenos’ right to live without fear of violence or vandalism. To increase safety for demonstrators, law enforcement and all citizens of Los Angeles, we are putting a curfew in place from 8 p.m. to 5 a.m, [03:00 - 12:00 GMT]" Los Angeles Mayor Eric Garcetti tweeted.

According to the ABC broadcaster, the Los Angeles police used tear gas and rubber bullets against the protesters, and more than 400 people were arrested during riots. Moreover, law enforcement officers reportedly got injured during the protests.

"Attention. @PhillyMayor [Philadelphia Mayor Jim Kenney] has implemented a mandatory city-wide curfew effective tonight at 8PM through tomorrow at 6AM [00:00 to 10:00 GMT]. Only persons with essential duties will be permitted outdoors," the Philadelphia Police Department said on the official Twitter page.

The police also added that 14 people were detained in the city during protests on Saturday.

"The City of Atlanta has established a curfew for 9 p.m. [01:00 GMT] tonight. Please stay off the streets. Please also be advised that Marta will stop running trains in all directions into or out of the city at 9:30 p.m," the Atlanta Police Department tweeted.

On Friday night, Governor of Georgia Brian P. Kemp declared a state of emergency for Fulton County that includes Atlanta in the light of mass riots.
Curfews have been enforced in several other US cities, including Minneapolis, Seattle, Portland, Denver, Cleveland, Columbus, and Pittsburgh.

Protests erupted across the United States this week after George Floyd, an African-American male, died in police custody on Monday.

A video circulating online showed Derek Chauvin, a Minneapolis white police officer, pinning unarmed Floyd to the ground with his knee. Chauvin knelt down on Floyd for more than eight minutes as he struggled to breathe. The officer continued to kneel even after Floyd became unresponsive and despite bystanders pleading for him to stop. Floyd’s death was seen by the public as yet another example of police brutality against African Americans in the US.