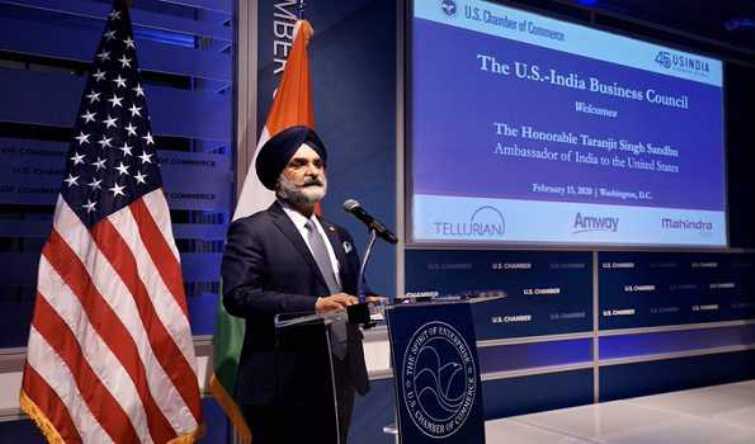 Washington/UNI: The partnership betwen India and the US is a "work in progress" and President Donald Trump's visit to India later this month will help solidify the partnership across all spheres, says India's Ambassador to the US, Taranjit Singh Sandhu.

It is a time of tremendous potential in the India-US relationship, and both nations are looking forward to continued partnership in the months ahead, said the envoy at a welcome reception hosted by US-India Business Council, a business advocacy group, here on Thursday.

"This extraordinary partnership, between India and the United States, is very much, a work in progress," said the envoy at a welcome reception hosted by US-India Business Council, a business advocacy group, here on Thursday, adding that President Trump's visit "will help to solidify the partnership across all spheres."

Trump will be in New Delhi and Ahmedabad on February 24-25 at the invitation of Prime Minister Narendra Modi.

Ambassador Sandhu said Prime Minister Modi has set an ambitious target of India becoming a $ 5 trillion economy by 2024. "The United States, is a preferred partner, in that endeavour."

Sandhu said defence and energy co-operation have been the game changer in the bilateral relationship which is being seen as the "most transformational" relationship.

The defence defence trade is valued at approximately $18 billion, with potential to grow much more.

In 2016, the US recognised India as a Major Defence Partner, opening the doors for extended co-operation. By signing agreements, such as LEMOA and COM CASA, both sides have created an enabling framework, for greater co-operation.

"During the 2+2 Meeting, in December 2019, we announced the signing of the Industrial Security Annex," he said.

Prime Minister Modi in his address address to the joint session of the US Congress in 2016 said that India-US relationship was primed for a momentous future, as both sides have overcome the "hesitations of history."

"Since then, we have seen, that our relationship has evolved into a global strategic partnership. We are co-ordinating and co-operating, in multiple spheres: in counter-terrorism; defence; Indo-Pacific; science and technology; trade and investment," said Sandhu.