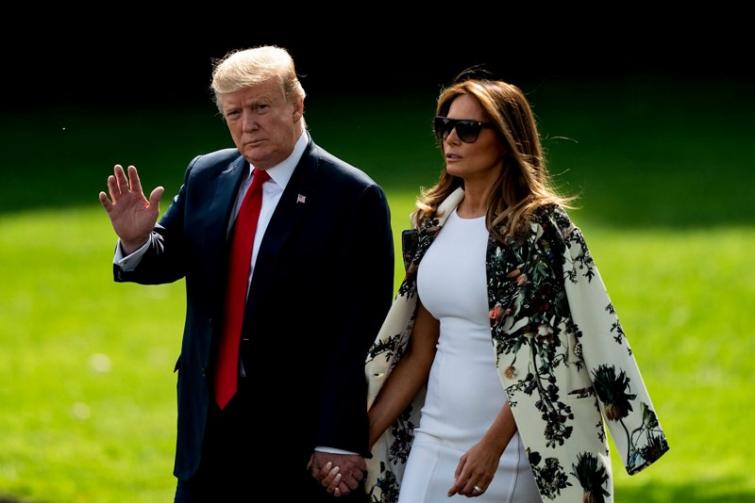 'POTUS and I are excited' to visit India: Melania Trump tweets

Washington/UNI: First Lady of the United States (FLOTUS) Melania Trump said she and her husband Donald Trump are excited about their India visit later this month and thanked Prime Minister Narendra Modi for inviting them.

"Thank you Narendra Modi for the kind invitation. Looking forward to visiting Ahmedabad and New Dehli later this month. @POTUS and I are excited for the trip & to celebrate the close ties between the USA and India," Ms Trump tweeted on Tuesday, responding to PM Modi's tweet in which he said their visit is a "very special one".

Thank you @narendramodi for the kind invitation. Looking forward to visiting Ahmedabad & New Dehli later this month. @POTUS & I are excited for the trip & to celebrate the close ties between the #USA & #India. https://t.co/49LzQPiVLf

Donald Trump and Melania Trump are scheduled for their first trip to India on February 24.

On February 24, Trump will participate in a huge joint public meeting called "Kem Chho Trump!" with Prime Minister Modi at a giant stadium. The event will be similar to Houston's "Howdy, Modi!" function held in September last year.

The venue for "Kem Chho, Trump" will be Ahmedabad's newly- constructed Sardar Patel Stadium which has a seating capacity of 1.10 lakh, more than the Melbourne Cricket Ground in Australia, the biggest cricket stadium in the world. Mr Trump will inaugurate the stadium.

Over one lakh people are expected to attend the event.

Before the "Kem Chho, Trump" event, the US President, along with PM Modi, will participate in a roadshow as well as visit Sabarmati Ashram to pay tribute to Mahatma Gandhi.

The roadshow has been planned along a 10-km decked-up stretch from the Ahmedabad airport to the Sabarmati Ashram.

"India will accord a memorable welcome to our esteemed guests. This visit is a very special one and it will go a long way in further cementing India-USA friendship," PM Modi had tweeted on Tuesday morning.