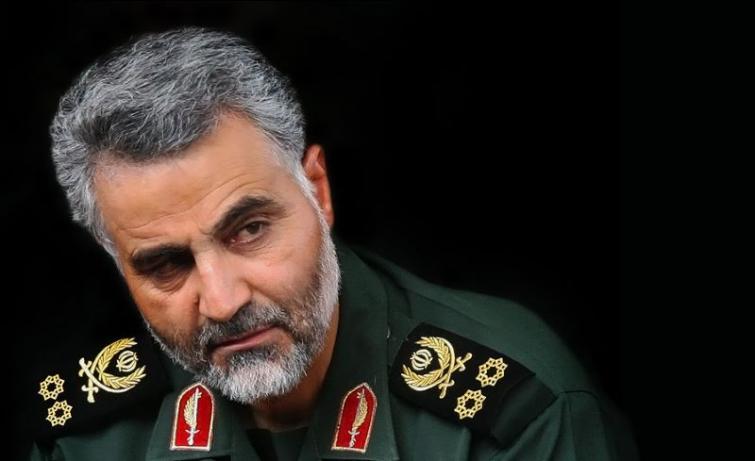 Washington/IBNS: A day after a US strike killed the top Iranian commander, President Donald Trump has defended the action saying Qassem Solaimani had contributed to terrorist plots as far as New Delhi and London.

Defending the US strike, Trump said, "..the ruthless Quds force under Soleimani's leadership has targeted, injured and murdered hundreds of Americans, civilians and servicemen."

"Soleimani made the death of innocent people.. contributing to terrorist plots as far as New Delhi and London. Today we remember and honour the victims of Soleimani's many atrocities and we take comfort in knowing that his reign of terror is over."

Soleimani, the chief of Iran's elite al-Quds force, was killed by the US airstrike at an international airport in Baghdad on Friday.

Abu Mahdi al-Muhandis, an adviser to Soleimani, was also killed in the airstrike.

Iran's ongoing conflict with the US escalated last week when an US embassy in Iraq was attacked by pro-Iranian militiamen.

A statement from President @realDonaldTrump: pic.twitter.com/Jfy4GCLdif

The Pentagon, the headquarters building of the United States Department of Defense, said he was killed at the 'direction' of the 'President'.

"At the direction of the President, the U.S. military has taken decisive defensive action to protect U.S. personnel abroad by killing Qasem Soleimani, the head of the Iranian Revolutionary Guard Corps-Quds Force, a U.S.-designated Foreign Terrorist Organization," Pentagon said in a statement.

"He had orchestrated attacks on coalition bases in Iraq over the last several months – including the attack on December 27th – culminating in the death and wounding of additional American and Iraqi personnel. General Soleimani also approved the attacks on the U.S. Embassy in Baghdad that took place this week," it said.

"This strike was aimed at deterring future Iranian attack plans. The United States will continue to take all necessary action to protect our people and our interests wherever they are around the world," it said.

Calling the US move as "international terrorism" and "extremely dangerous and foolish escalation", Iran said now Washington will have to bear the responsibility of the consequences of the strike.

"Canada is in contact with our international partners. The safety and well-being of Canadians in Iraq and the region, including our troops and diplomats, is our paramount concern. We call on all sides to exercise restraint and pursue de-escalation. Our goal is and remains a united and stable Iraq," Champagne said in a statement.

"Canada has long been concerned by the Islamic Revolutionary Guard Corps' Qods Force, led by Qasem Soleimani, whose aggressive actions have had a destabilizing effect in the region and beyond," Champagne said in the statement.

Calling for “peace, stability and security” in the region, India's Ministry of External Affairs (MEA) said in a statement, "We have noted that a senior Iranian leader has been killed by the US."

"The increase in tension has alarmed the world. Peace, stability and security in this region is of utmost importance to India. It is vital that the situation does not escalate further. India has consistently advocated restraint and continues to do so," it said.