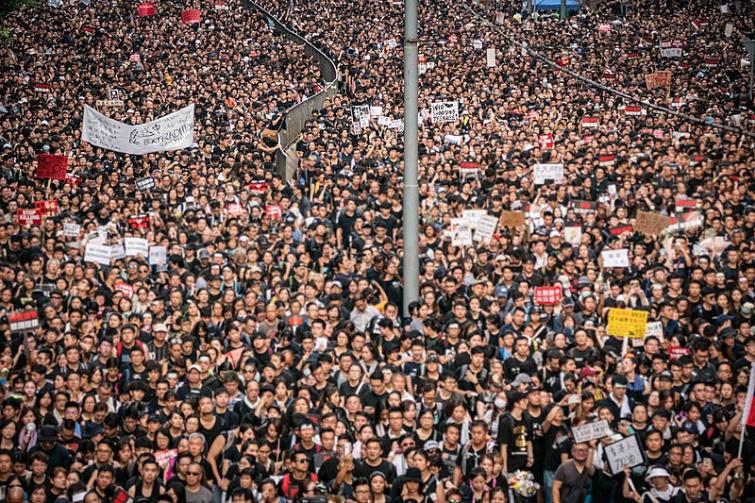 Washington/Sputnik/UNI: The United States has condemned recent violence in Hong Kong, where protests have escalated, calling on both protesters and police to turn to peaceful means of resolving their conflict.

"The United States is watching the situation in Hong Kong with grave concern. We condemn violence on all sides, extend our sympathies to victims of violence regardless of their political inclinations, and call for all parties – police and protestors – to exercise restraint," US State Department spokesperson Morgan Ortagus said in a Monday statement.


According to the release, Hong Kong’s adherence to the rule of law is crucial in preserving its special status under US law.


"The United States urges the Hong Kong government to build on its dialogue with the Hong Kong public and begin efforts to address the underlying concerns driving the protests. We also urge the protestors to respond to efforts at dialogue," the State Department spokesperson stressed.


Earlier on Monday, Hong Kong Chief Executive Carrie Lam said at a press conference that Hong Kong will not achieve their political goals by resorting to further violence. Beijing has repeatedly stated that the situation in Hong Kong is the result of foreign interference in China's domestic affairs and expressed full support for the actions of local authorities.


"We urge Beijing to honor the commitments it made in the Sino-British Joint Declaration, including commitments that Hong Kong will ‘enjoy a high degree of autonomy’ and that the people of Hong Kong will enjoy human rights the freedoms of expression and peaceful assembly – core values that we share with Hong Kong," US State Department spokesperson Morgan Ortagus emphasized on Monday.


On Friday, local media reported that a student from the Hong Kong University of Science and Technology had died after falling from a building where police fired tear gas amid unrest. The incident is believed to be the first fatality directly linked to the protests.


Demonstrations continued on Monday with law enforcement officers using firearms in three districts, which led to the injury of one person.


Hong Kong, which returned to China in 1997 and enjoys a special administrative status, has seen a wave of demonstrations that were initially organized in protest against proposed amendments to the city's extradition law.


After the controversial extradition bill, which would have allowed people to be sent to mainland China for trial, was withdrawn, more demonstrations were organized with protesters unleashing additional demands.