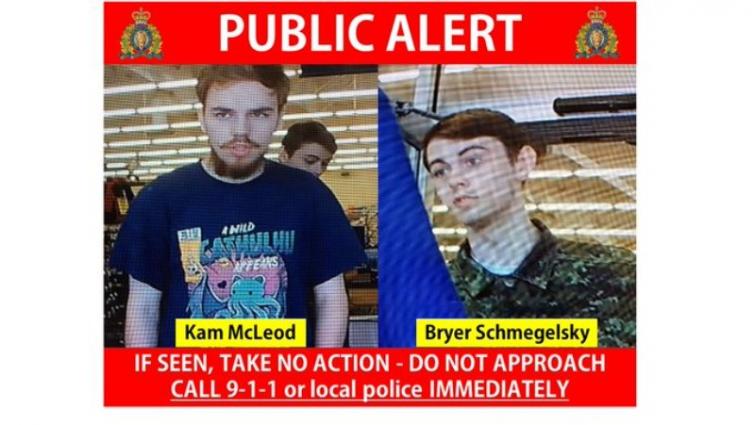 Manitoba, Jul 27 (IBNS): RCMP said Friday afternoon there could be a possibility of two murderers, Bryer Schmegelsky, 18, and Kam McLeod, 19, wanted in the killings of three people in Northern British Columbia, leaving Northern Manitoba area with the changed appearances with the help of someone who didn’t know who they were, media reports said.

The pair are suspects in the deaths of American Chynna Deese, 24, and her 23-year-old Australian boyfriend Lucas Fowler, who were shot to death on the side of a Northern British Columbia highway and found on July 15. Schmegelsky and McLeod have also been charged by the RCMP in the death of  Leonard Dyck, whose body was discovered on a road 500 kilometers away four days later.

Cameras in a pair of northern towns thousands of kilometers apart had recorded last week of two chapters, weary couple's intimate hug in the last hours of their lives and a purchase by the two blank-faced teens suspected of killing them.

RCMP handed out the images to a public transfixed by tragedy.

Police said their search in “high probability areas of interest in the Gillam area” is continuous and added that over the next few days door-to-door canvases in the town and Fox Lake Cree Nation would be conducted.

This 'dead-end' Manitoba town is ‘the perfect place to get caught.’ So, where are the two B.C. fugitives? https://t.co/GbYz6AcwY7 via @nationalpost