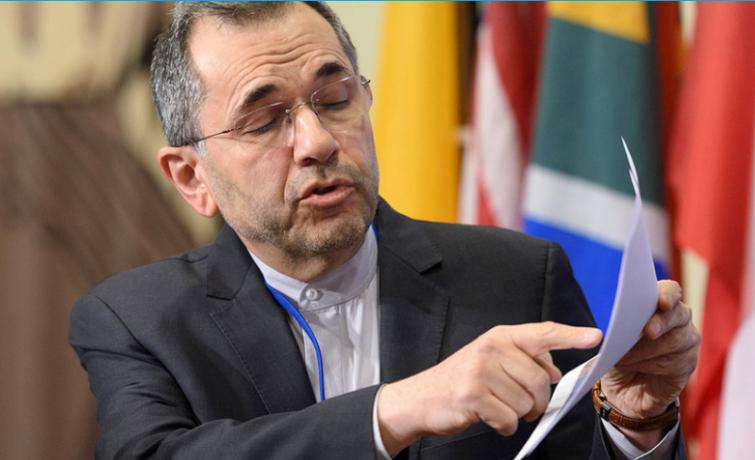 New York, June 25 (IBNS): There is a need for “genuine regional dialogue” to address rising tensions in the Gulf, Iran’s Ambassador to the United Nations said on Monday, calling on Secretary-General António Guterres “to play a role” in bringing countries to the table.

Ambassador Majid Takht Ravanchi, was speaking to reporters outside the Security Council chamber in New York, where a closed-door meeting was being held to discuss the deteriorating relations between the United States, and Iran, which has also ratcheted up tension with Iran’s regional rival Saudi Arabia, and its allies.

Iran’s Permanent Representative said he had asked to take part in the meeting, but the request had been refused. He blamed the US, a Permanent Member of the 15-member body. He said that Iran wanted “neither war, nor an escalation of tension” in the region.

“The US decision today, to impose more sanctions against Iran is yet another indication of continued US hostility against the Iranian people and their leaders”, he said. “To ease tensions in the broader Persian Gulf region, the US must stop its military adventurism in our region, as well as its economic war”.

US officials have said that Iran was responsible for two separate incidents in recent weeks, around the Strait of Hormuz and the Gulf of Oman, involving six oil tankers which were damaged. Iran has categorically denied any involvement.

Last week, an unmanned US drone was shot down by the Iranian military over what the US said were international waters in the Gulf, but Ambassador Ravanchi repeated Iran’s assertion on Monday, that the drone had been violating Iranian airspace when it was shot down.

Iran 'was responsible' acting US ambassador

Speaking at the same podium immediately after the closed meeting, the acting US Ambassador, Jonathan Cohen, told reporters that “it’s clear to us, and it should be to the world, that Iran was responsible for the May 12 and June 13 attacks against ships in the Persian Gulf. Such attacks pose a serious threat to the freedom of navigation and commerce in one of the world’s most important waterways.”

Cohen said the drone had not entered Iranian airspace but relied on interpreting its position as having been in the country’s “flight information region”, which is “not the same as their airspace”.

“Iran must understand that these attacks are unacceptable. It’s time for the world to join us in saying so. Our policy remains an economic and diplomatic effort to bring Iran back to the negotiating table.” Earlier, the Iranian Ambassador had said that his country would not hold talks with the US while punitive sanctions continued, along with intimidation and threats.

‘Nerves of steel’ are needed: Guterres

Asked earlier at the regular noon briefing for reporters at UN Headquarters, to comment on the continuing tensions around the Gulf region, the UN’s Deputy Spokesperson Farhan Haq said that the Secretaryâ€‘General “has made clear his concerns, both about the recent incidents and also the rhetoric from various quarters.”

He’s made it clear that it would be a catastrophe to have any escalation in the Gulf region”, added Haq. “He has urged all sides to show nerves of steel, and he is continuing to maintain that, and he wants to make sure that they take steps to avoid any further sorts of provocation.”

After the closed-door talks, Ambassador Mansour Al-Otaibi of Kuwait, which holds the Council’s presidency for the month of June, read out an informal statement on behalf of the 15-member body condemning the attacks on oil tankers in the Gulf, saying they represented a “serious threat to maritime navigation and energy supply” as well as being a threat to international peace and security.

“The Council members urge concerned parties and all countries in the region to exercise maximum restraint and take measures and actions to reduce escalation and end tension,” he said.

The statement called for differences to be addressed “peacefully and through dialogue”.