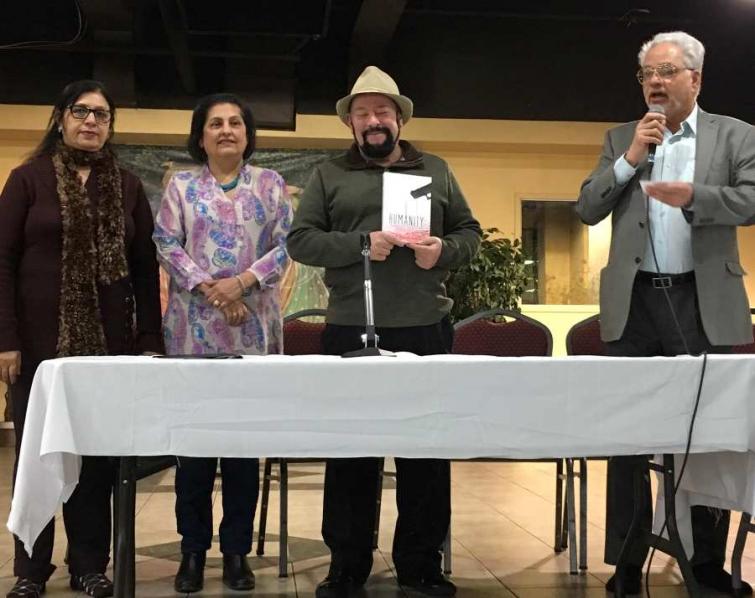 Toronto, Mar 18 (IBNS): Toronto’s Hindu community is embracing the work of a Jewish writer whose research shows the Biblical Hebrew people came to the Middle East from Ancient India.

Author Barry Brown, who spoke at the Hindu Sabha Mandir last week, was warmly welcomed by the hundred plus audience in Brampton.

His book, Humanity: The World Before Religion, War & Inequality, claims the start of the Jewish Bible and the end of India’s ancient text the Mahabharata are connected by the same ancient history.

“Barry Brown is a Pulitzer Prize-nominated Canadian journalist. His book says that the first war in the world is the Mahabharata,” said Ashok Kapoor, of the Hindu Sabha Mandir, introducing Brown to the audience.

According to Brown, ancient India’s history ends almost 6,000 years ago with the destruction of its ancient kingdoms in what Brown’s book claims is the first large-scale, organized war in human history. And that war is also the historic event that inspired the Bible’s tale of the “fall of mankind” in the Garden of Eden and the beginning of the Jewish calendar nearly 6,000 years ago.

“The Bible says Eden was located at the eastern end of a larger land called “Havilah” and according to the 20-volume, 1906 Jewish Encyclopedia, the oldest traditions in Judaism and Christianity dating back more than 2,000 years all agree Havilah was India. What happened in India nearly 6,000 years ago that could have started this history? It was the world’s first war,” Brown says. “It was exploring this possibility that started my research on Humanity.”

His research also shows the genetic family ties between the Jewish “Levites”â€Š—â€Šthe tribe of born Jewish priestsâ€Š—â€Šand several families of Hindu Brahmans including the Yadava clan that the Mahabharata says fought in the 6,000 year old war.

Members of the Jewish, Christian and Muslim communities have also praised Humanity.

“I don’t know if you’re right but you’ll change history if you are,” Yaen Vered, Canadian Representative Israeli Antiquities Authority.

The largely Hindu audience that included Rakesh Goenka, past president of the Indo Canada Chamber of Commerce, Vinod Sharma, in charge of the Seniors’ programs, and Vijaya Vikrant of the Hindi Writers Guild.

At the end of the session, several audience members energetically applauded his message, bought the book for themselves and for their children and grandchildren.