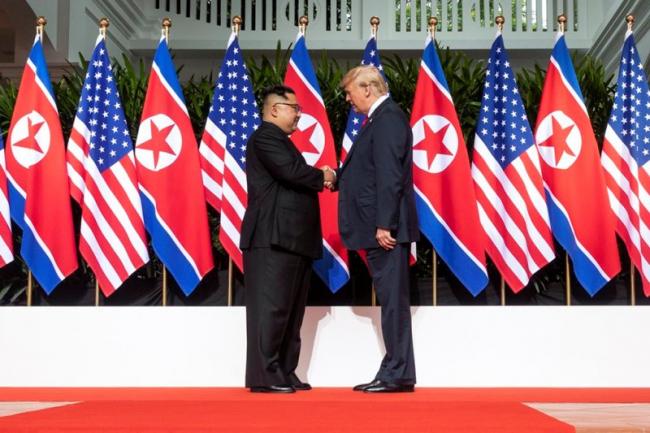 Washington, Jun 23 (IBNS): Sanctioning North Korea and Donald Trump go hand in hand, but, following the latest sanctions against the former, the US President has done a U-turn.

Just over a week ago, Trump, following his historic meeting with his North Korean counterpart Kim Jong-un, dismissed any further threat from North Korea.

The 72-year-old even took to Twitter to post: "Just landed - a long trip, but everybody can now feel much safer than the day I took office. There is no longer a Nuclear Threat from North Korea. Meeting with Kim Jong Un was an interesting and very positive experience. North Korea has great potential for the future!"

"Before taking office people were assuming that we were going to War with North Korea. President Obama said that North Korea was our biggest and most dangerous problem. No longer - sleep well tonight!," another tweet read.

Yet, on Friday, his office said that the Asian nation still poses extraordinary threats and must be sanctioned.

It followed the cancelled military drills between South Korea and the USA.

Since 2008, US Presidents have routinely renewed a national emergency against North Korea, citing threats.

On Friday, Trump extended the rule while citing "the existence and risk of proliferation of weapons-usable fissile material on the Korean Peninsula and the actions and policies of the Government of North Korea".

However, Democrats lawmakers have questioned Trump's sudden change of heart.

"We have to treat these negotiations far more seriously than just as a photo op. Saying the North Korea problem is solved doesn't make it so," he said.