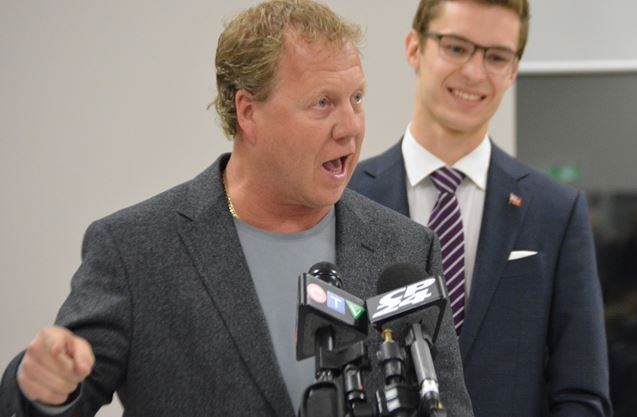 Toronto, Jan 29 (IBNS): Ahead of the election in June, the Ontario Progressive Conservative party has fallen into a crisis after a series of resignations following Patrik Brown's exit from the party, media reports said.

Brown's resignation, which came after the leader was alleged to sexual misconduct, was followed by the exit of several of his loyalists.

Dykstra's resignation came while the party members are waging a civil war over the future of the party.

Dykstra offered his resignation on Sunday.

He said he has resigned as the party moves to "coalesce" around the new leader. CBC News reported.

However he believes the party is ready for the election.

"After two years in this position, I know the party is prepared to take on the hard work necessary to fight this election" Dykstra's statement was quoted by CBC News.

Executive director Bob Stanley, who was known to be closer to Brown, has been fired.

Patrik Brown has resigned as Ontario Progressive Conservative leader after allegations of sexual misconduct were brought against him by two women, CTV News reported.

In a statement issued by Brown, he said he is resigning after consultations with family, friends and caucus members.

However, he denied all the allegations which were brought against him.

Brown statement was quoted by CTV News: "I will remain on as a MPP while I definitively clear my name from these false allegations."

Ontario PC deputy leaders too said in a statement that Brown can fight against the allegations legally but he cannot continue as the party leader anymore.

Brown cannot lead Ontario PC to the election with such serious allegations against his name, the deputy leaders said.

The allegations were brought by two women in an interview with CTV News.

Both the women alleged that Brown had ill-treated them.

One of the two women alleged that Brown had asked her to perform an oral sex which she did for sometime.

"He pulled down his pants said, and I don’t know if he said 'suck my dick' or 'put this in your mouth,' but something along those lines" she told CTV News.

Another woman was a university student when she was allegedly assaulted by Brown.

Brown met the woman on a flight and flaunted his link ups in different fields in order to gain her attention. Brown even proposed her to join him at a bar that night. Though she initially did not join him, later contacted Brown while she was looking for a job.

Barry, who was an MP in then Prime Minister Stephen Harper's government, hired him to work in his Barry constituency.

Days after organising the Hockey Night in Barrie Charity game, Brown sent an email to the girl which reads: "You know you are my favourite :)."

At an after-party event, Brown even offered her drinks. Then she along with her friend visited Brown's place. Brown said he would show pictures of his Asia trip.

Though her friend later left Brown's house, the accuser stayed back. She said she was sitting with Brown on his bed.

"The next thing I know he's kissing me. Sitting beside me, kissing me and then I was, I kind of just froze up. He continued to kiss me and he laid me down on the bed and got on top of me. I remember consciously trying not to move my mouth and I was just not moving, so I was laying there immobile and he kept kissing me."

"I felt it was sexual. I could feel his erection on my legs when he was on top of me so I felt that it would have gone to sexual intercourse if I had not done anything," she said. "I would characterize that as a sexual assault. "

"That scenario, like of a very inebriated young employee in the bedroom of her boss, alone with him, who hasn’t had a drop of alcohol all night, just that’s an intimidating situation and I was not sure what to do about it," she said.

She told Brown that she had a boyfriend and he must drop her at her house. Later Brown indeed dropped at her house.

Though she did not report to the authorities, the girl divulged to her father much later.

Brown in a hurried press conference on Wednesday denied all the allegations.

He said: "First I want to say these allegations are false. Categorically untrue. Every one of them. I will defend myself as hard as I can, with all means at my disposal. It’s never okay."

"It’s never okay for anybody -- for anyone -- to feel they have been a victim of sexual harassment, or feel threatened in any way. Let me make this clear: a safe and respectful society is what we expect and deserve," he added.

After hearing the allegations, Brown's closest aides had also resigned.