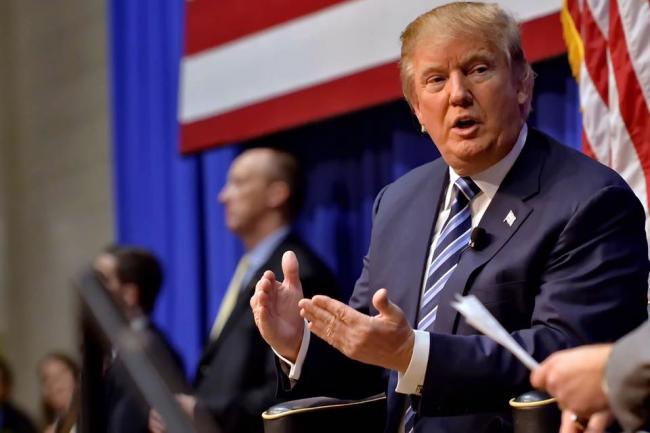 Shutdown is a nice present of Democrats on first anniversary: US President Donald Trump

Washington, Jan 20 (IBNS): US President Donald Trump attacked the Democrats over the government shutdown and said it was a 'nice presented' gifted to him on first anniversary in power.

Trump said the Democrats are far more concerned with 'Illegal Immigrants' than they are with our great 'Military or Safety at dangerous Southern Border'.

"Democrats are far more concerned with Illegal Immigrants than they are with our great Military or Safety at our dangerous Southern Border. They could have easily made a deal but decided to play Shutdown politics instead. #WeNeedMoreRepublicansIn18 in order to power through mess!," Trump tweeted.

He said: "This is the One Year Anniversary of my Presidency and the Democrats wanted to give me a nice present. #DemocratShutdown."

He said: "For those asking, the Republicans only have 51 votes in the Senate, and they need 60. That is why we need to win more Republicans in 2018 Election! We can then be even tougher on Crime (and Border), and even better to our Military & Veterans!."

"Democrats are holding our Military hostage over their desire to have unchecked illegal immigration. Can’t let that happen!," he said.

Trump further accused that the Democrats were taking Americans hostage with their demands and said: "Democrats are holding our Military hostage over their desire to have unchecked illegal immigration. Can’t let that happen!."

As the Senate failed to agree on a new budget, the US government on Saturday commenced the move of shutting down many of its services.

Amid disputes over the issues of immigration and border security, a bill to fund the federal government until Feb 16 failed to receive the required 60 votes.

The move is likely to hit thousands of federal workers.

Just hours before the scheduled voting, US President Donald Trump had reportedly supported the House’s proposal on Thursday night to continue government funding through mid-February.

Trump had tweeted: ‘‘A government shutdown will be devastating to our military... something the Dems care very little about!’’

According to official reports, the government shutdown will  mean that many departments and offices, like the Department of the Treasury, the Environmental Protection Agency and the Library of Congress, will be closed.

House members reportedly were preparing to be on recess next week, but many of them refused to go home until the resolution was known to them.

"I'm not going home if the government shuts down," Idaho Republican Rep. Mike Simpson was reported to state.

President Trump was scheduled to leave for Mar-a-Lagoa a few hours before the government might shut down, reports said. But he postponed his trip and was siad that he would wait to see the end results.