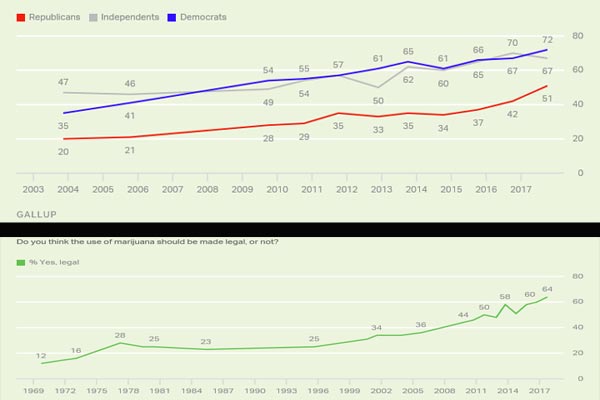 US: Demand for legalisation of cannabis hits all time high

Washington, Oct 30 (IBNS): The demand for the legalisation of cannabis has hit an all time high in the Unites States, with now every two out of three Americans opting for it.

According to a new poll by Gallup, almost 64 percent of Americans have now nodded for the use of cannabis legally.

Gallup has been conducting the poll on the same topic for the past 48 years and according to its data, the pro legalisation figures have doubled since 2000.

The new rise in pro legalisation means that America is also witnessing the lowest percentage of people going against it.

According to the new data, only 34 percent of Americans have denied to lend their support towards the campaign.

The survey also found out that almost 51 percent of Republicans now want cannabis to be legalised, which is also a new record.

Among the others, 72 percent of Democrats and 67 percent of independents also opted for the same.