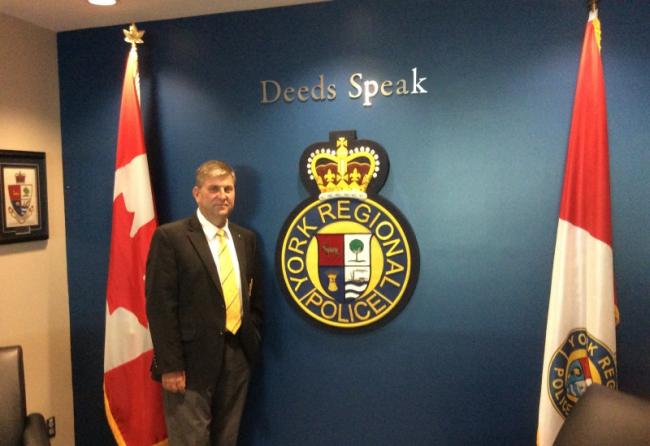 Legalisation of marijuana not a good step: York Police Chief

Chief Jolliffe, you have been active for over 38 years now. If you are to pick the watershed moment of your career what would it be?

I have got a few. Actually arresting some body for murder before the murder was discovered. That happened in 1984 just a few years in my job as a police officer. It happens once in a life time that you arrest somebody before the murder was discovered. This rare event caught the attention of the chief of the police of the day and not long after that, he asked me to come and work for him. It was a rare opportunity for me. I would not have been in this position at present if I had not got the chance to work for the Chief of the Police at that time.


You have served in a variety of functions including Uniform Patrol, Criminal Investigations, Planning Services, Project Management and Strategic Planning. Which one out of these would you say was the most challenging for you? Why?

You missed a few of the roles. For example, I looked after large police districts with 250 folks with different work components, looked after SWAT teams, which is a very operational function. They are all complex and challenging in their own way. In 1986 as a young police officer I was working on my thesis on the growth of this region. I had written a report to be presented to the government that 185 more police officers should be hired in 1987 and 1988. They approved that. As a result of that, this year YRP would be seeing 60 retirements.


According to the annual statistical report, the rate of import and exportation of drugs had increased in 2016 from a corresponding period in 2015. Has the percentage dropped this year?

I had done some research on these. There has been some increase from 5 percent to 65 percent. The reason we could not focus on this aspect was that the police force -- which has to deal with specifically different issues at a given time – was at that time focused on trying to find out from where this drug function actually evolved. There is this burning question that I ask people while traveling if any body knows from where these drugs come from? Right now, we are in the midst of an opioid fentanyl crisis. And I am going to tell you something. It is coming from an organized crime. That is why we spend time at the higher end. In 2015, we had five investigation, in 2016 we had 65 investigation. We have a strong opinion around Marijuana. We have been in the community for a long time and everyday we see what unfolds and we have the best seat the house to see what unfolds.


What are the areas that you as a department would like to improve upon?

I think as an organization we are pretty strong in the category but I have to read a lot and watch a lot and the conversation around trusting confidence in community. We are constantly trying to improve and ways to connect to community, to display the nature of the police service and the connections that we have so that we can build a front-line delivery model and a role model.

According to a reminder on the York regional Police official Twitter handle, it states: "Twitter is not monitored 24/7 and is not a reporting tool. In emergencies call 9-1-1. For non-emergencies call 18668765423." In a day and age when every thing is so web oriented, don't you think you should change too (in terms of using Twitter as a reporting tool)?

Interesting question. Technology is changing. I had to do a bit of research on this too. Twitter allows only 120 characters for use which is rather small. We have other options: calling 911, online reporting, crime stoppers and tons of other opportunities. So if one cannot use their phone we make use of the technology. We are moving to enhanced technology called e911 where actually you are able to connect the video or photographs with that event. We encourage citizens to let us know of any incidents that are not right. We want to know about that which can be provided by way of photographs etc. this is very helpful.


Don’t you think for drug overdoses or drug related crime, involving young communities, shouldn't the government become more active in finding out ways to solve this problem rather than putting the criminals behind the bars?

Inactivity of youth is a problem. We have a centre which we call community safety village and we bring kids from junior kindergarten to Grade 5 to have conversations with them around bicycle safety, travel safety helmet safety, water safety, fire safety, internet safety and all kinds of safety concerns. So we are engaging pupils from Junior kindergarten to grade 12 and I would say 99 percent of these opportunities to engage our community are all about encouraging youth to select healthy life style. Next year we would be teaching Grade 5 students all about diversity and inclusion and this has become a new Hate Crime Prevention programming.

We need to be thoughtful about how our legislation is designed and how the police services get the time to prepare the police officers for this new changing legislation because if you are not well versed on how things are legally unfolded, you end up creating laws and these case laws can be very damaging in case of fight against impaired driving and drunk driving.

So that is why I say : Do it slowly, do it methodically, make sure there are regulations in place, make sure there are training in place so that when we get to this is where we are going that everyone is in a comfortable position. I have a very strong opinion specially around drinking and driving, this police services is very much focused on drinking and driving in York region.


Do you think legalization of marijuana is good step?


Have you introduced any methods to check these in your police force?

We do tremendous amount of work on ethics and behaviour and education around police services act. Folks may not realise that in the police service act chief of police has a very interesting position. You know I am managing 23,00 employees, managing  314 million dollar budget to see that our folks are comfortble and secure but I am also disciplinarian as a dad of YRP. One of my jobs is to make sure that the folks are behaving themselves and I take that role here very seriously. Reputation of our police service is extremely important for me. That is why occasionally people might have noticed that when ever an issue arises, I take action to see things done very quickly and I do not dab around my business.


What is a typical day in Chief Eric Jolliffe's life like?

There is no typical day. My day usually begins at about 5:30 in the morning and see around 30 emails. Every day is different. Every weekend pretty much is devoted to the communities. I do not have enough time with my family. But when I accepted this job I knew all the challenges and I was prepared for this. I have two older kids and have grand kids and I make sure I squeeze a little time out of my busy schedule to spend with them. As a chief of police you are entrusted for some very important things and trusted to ensure that your community feels safe and secure, trusted that the funding that you are given is spent appropriately. There are all sorts of different expectations of the police chief.


With 30 years of experience in police and with your leadership role, are you contemplating to join politics in the near future?

I do not know about it. This question has asked by many people. First of all we are seen publicly and we do have our opinions. Our opinions are based on what we see every single day in our community. My predecessor was hugely engaged in community.