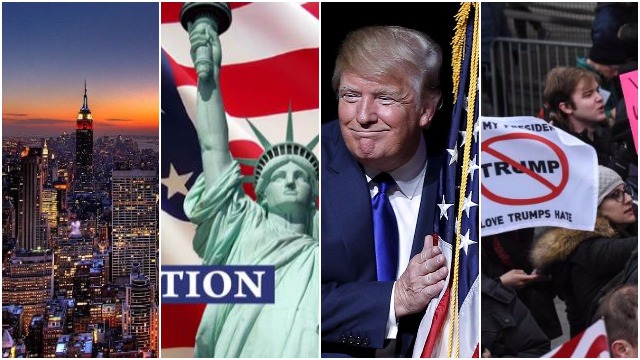 India Blooms News Service | | 30 Jun 2017, 09:27 am
#TravelBan, # DonaldTrump, # USExecutiveOrder, # MuslimsCountries
Washington, June 30 (IBNS) A supposed "watered down" version of the travel ban on six Muslim countries and a section of refugees by the Donald Trump administration on security grounds finally took effect on Thursday (US time) after litigations in court even as experts said more court battles are in the offing following the implementation of this order.

The Executive Order 13780 is aimed at "Protecting the Nation from Foreign Terrorist Entry into the United States," a policy in pursuance of the hardline approach by Donald Trump against Islamic terrorism.

A visitor from these countries - Iran, Syria, Sudan, Libya, Yemen and Somalia- must prove a relationship with a parent, spouse, finacee, child, adult son or daughter, son-in-law, daughter-in-law or sibling in the US in order to obtain a visa to enter the country.

Family members like grandparents, grandchildren, aunts, uncles, nieces, nephews, cousins, brothers-in-law, sisters-in-law, and any other "extended" family members will not be considered "close family" under the executive order.

Briefing media, a US official said on Monday, the United States Supreme Court unanimously ruled that the vast majority of the President’s March 6th Executive Order Protecting the Nation from Foreign Terrorist Entry into the United States could go into effect.

"This ruling was a significant win for our national security, and President Trump was particularly gratified by the unanimity of the decision. As recent events have shown, we are living in a very dangerous time, and the U.S. Government needs every available tool to prevent terrorists from entering the country and committing acts of bloodshed and violence. And as the President reiterated following Monday’s ruling, his number one responsibility as Commander-in-Chief is to keep the American people safe," the official said.

"Today, the Trump administration will begin taking additional steps to do just that. Pursuant to the President’s June 14th interagency memorandum and to the extent permitted by the Supreme Court, implementation of Executive Order 13780 will begin today at 8 o’clock p.m. Eastern Standard Time."

The test for foreign nationals who can enter USA under the Supreme Court's ruling is whether one has a "credible claim of bona fide relationship" with either an entity (like a school or a job) or a person living in the US (such as a spouse).

The 90-day ban on visitors from Iran, Libya, Somalia, Sudan, Syria and Yemen, and the 120-day ban on refugees will have exceptions for those  with "close family relationships" in the United States.

"....the guidance we have from the President is to put a pause on certain travel while we review our security posture. And we have guidance on what types of relationships would be exempted from the pause, and we are following our legal guidance in the Immigration and Nationality Act and what was in the court decision in determining what constitutes the bona fide relationship," said the US official.

"...our goal is to meet the intent of the presidential directive in line with the Supreme Court decision. Waivers still exist, and consular officers still have the ability to waive the inadmissibility for certain types of applicants. I can’t predict how many applicants that will be, however," said the official.

"....we are looking at the court’s decision as we implement this. And there were two different portions to the bona fide relationship. So we looked at the family relationships. And again, we used the INA definition of family as our basis for that, in addition to some other language from the ruling.

"And in terms of the entities with which one can have a relationship, yes, individuals who are students or who have lecturer positions and have an established connection would be able to continue traveling on their visas or likely qualify for visas, again, according to an individual consular officer decision," the official said.

The ban was however challenged in court by the state of Hawaii questioning the Trump administration’s interpretation of a standard for granting visas as enumerated by the supreme court ruling Monday allowing the ban.

Reports said Hawaii filed an emergency motion asking the federal district court judge  to "clarify as soon as possible that the Supreme Court meant what it said," and issue an order confirming that the court orders do not allow the Trump administration to exclude grandparents, grandchildren, brothers-in-law, sisters-in-law, aunts, uncles, nieces, nephews and cousins of persons in the United States.