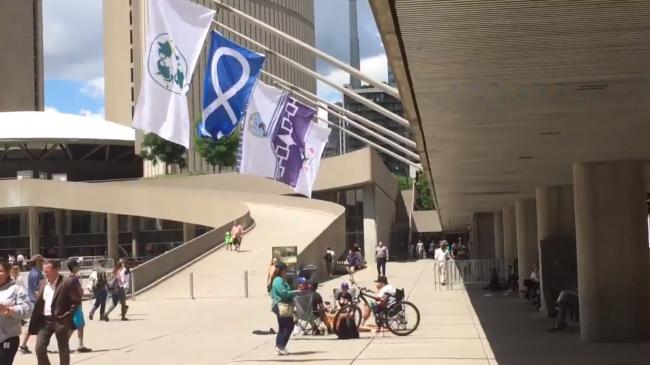 
In 2009, June was declared National Aboriginal History Month following the passing of a unanimous motion in the House of Commons.

During the month of June and on June 21 every year, many indigenous people and communities celebrate their culture and heritage to recognize the significance of the summer solstice as the longest day of the year.

Wednesday's ceremony, which started at 5:30 am on Nathan Phillips Square, was attended by approximately 200 people includingindigenous leaders and community members, members of City Council the public and City staff.

The Sunrise Ceremony was inaugurated by Steve Teekens, Executive Director of NaMeRes and his helper Oshkaabewis.

This was followed by a permanent commemorative installation of indigenous flags including Mississaugas of the New Credit First Nation, Six Nations, Huron-Wendat, Métis and Inuit.

The Restoration of Identity included an installation of a commemorative statue of a Turtle, as specified in the Truth and Reconciliation Commission's 94 Calls to Action (Call to Action #82, available at http://bit.ly/1ETcJ8g).

Proclamation for National Aboriginal Day in Toronto was then read by Mayor John Tory and presented it to Chrisjohn.

It was followed by an addition of a stencilled chalk drawing to the Moccasin Identifier Project by the participants, on the podium roof ramp leading onto Nathan Phillips Square.

The moccasin markers are a reminder of Toronto City Hall’s pledge to follow traditional territory of indigenous people.