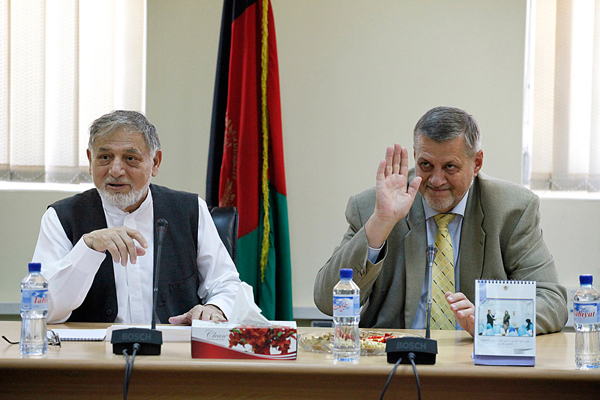 India Blooms News Service | | 31 Jul 2014, 11:35 am
#Afghan audit process
New York, July 31 (IBNS) The top United Nations official in Afghanistan has welcomed the decision to adopt criteria for the invalidation and recount of ballots as part of the ongoing audit over the results of the presidential run-off poll.

“This decision will ensure that the audit process will lead to the invalidation of fraudulent ballots while all valid votes will be counted, thus honouring the courage and determination of the Afghans who voted in both rounds of the Presidential election,” said Ján Kubiš, the Secretary-General’s Special Representative, in a statement released on Wednesday.

Having met with the Independent Election Commission (IEC) earlier in the day,  Kubiš said the Commission’s decision to adopt the criteria means that the regulatory framework for the Presidential audit is now complete.

“It will help minimise the points of friction encountered in the audit so far. I encourage both campaigns to continue demonstrating the political will necessary to proceed expeditiously with the audit, without any interruption,” added  Kubiš, who also heads the UN Assistance Mission in Afghanistan (UNAMA).

The IEC decision is based on a UN proposal founded upon international best practice. Under the technical agreement reached by the two Presidential candidates, Abdullah Abdullah and Ashraf Ghani, on 12 July, the UN was asked to propose the manner for the international supervision of the audit, which it did after consultations with both Presidential campaigns.

Agreed on by both of the candidates, the plan involves a complete audit of the results of the run-off held on 14 June– roughly eight million ballots – to be held in Kabul with monitoring by national and international observers, as well as the formation of a government of national unity, among other points.

With the process resuming on Saturday following the Eid break, the Special Representative said he looked forward to the candidate teams continuing their participation and focusing on large-scale irregularities rather than contesting individual ballots.

Special Representative for Afghanistan and head of UNAMA, Ján Kubiš (right), with Chairman Ahmad Yusuf Nuristani of the IEC Board of Commissioners following a meeting of the IEC. Photo: UNAMA/Fardin Waezi