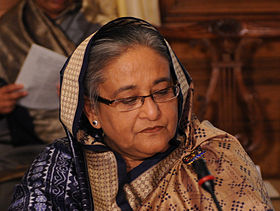 "If a political party   takes wrong decision then why the people will pay for it?" she said while addressing a press conference  at Ganabhaban.

Speaking on the BNP's demand for a fresh poll in the country, Hasina said: "They have already missed the train. The train has gone now. They will have to wait for another train."

The BNP earlier had said it would go on a movement after Eid.

Reacting to the BNP's announcement, Hasina said: "The people are with me. We'll take them on the streets."