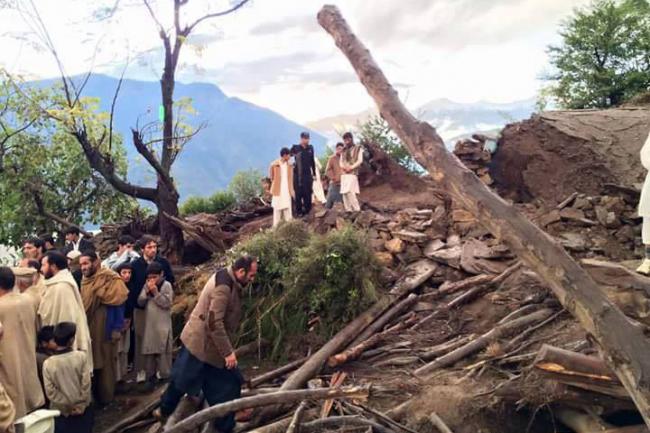 India Blooms News Service | | 28 Oct 2015, 09:18 am
#UN, # Afghanistan, # Pakistan, # Earthquake
New York, Oct 28 (IBNS): Hundreds of people have been killed and thousands of homes in Afghanistan and Pakistan were destroyed by the massive 7.5 magnitude earthquake that struck the Badakshan Province in Afghanistan on Monday, according to the United Nations Office for the Coordination of Humanitarian Affairs (OCHA).

World Health Organization (WHO) spokesperson Christian Lindmeier, speaking at a press briefing in Geneva on Tuesday, said figures from health facilities in the area reported 300 injured and 21 deaths as of this morning.

In Pakistan, over 1,500 people had been injured and 180 deaths have been reported, said Mr. Lindmeier. “The causality figures from both countries are constantly changing,” he added, as reports continue to come in from the more rural and difficult to access areas.

WHO's priority, he continued, is to help the health authorities in both countries to provide assistance to the people in need. WHO is concerned about health needs in addition to immediate traumas, including waterborne diseases, diarrhoea, dysentery, hepatitis A and E, acute respiratory infections, post-traumatic stress disorder, infected wounds, malaria, and dengue fever.

The recurrence of other vaccine preventable diseases such as measles and tetanus was also a concern as well, added Lindmeier, noting that WHO is closely monitoring the situation.

Children in earthquake-affected regions of Afghanistan and Pakistan are particularly vulnerable, and face further danger as extreme conditions and insecurity have cut off communities from aid, according to a statement issued by the United Nations Children’s Fund (UNICEF).

Among those killed by the quake were 12 school girls who, according to OCHA, were crushed in a stampede as they fled their collapsing school.

“We are extremely concerned for the safety and wellbeing of children, who are already the most at risk in any disaster and are now in danger of succumbing to the elements as temperatures plummet,” said UNICEF Regional Director for South Asia Karin Hulshof.

The situation has been exacerbated by heavy rain and snow in the remote, mountainous areas affected by the earthquake.

Communication in the region is poor and, because of the tough terrain and security operations, access is difficult. Some areas are completely inaccessible, while much of the rest of the region is difficult to reach even in ordinary circumstances.

UNICEF Afghanistan and Pakistan are working with national governments to deliver life-saving supplies to tens of thousands of affected children and their families. UNICEF has also cautioned that health, nutrition, hygiene and education services will now be under exceptional stress, placing more children at risk.