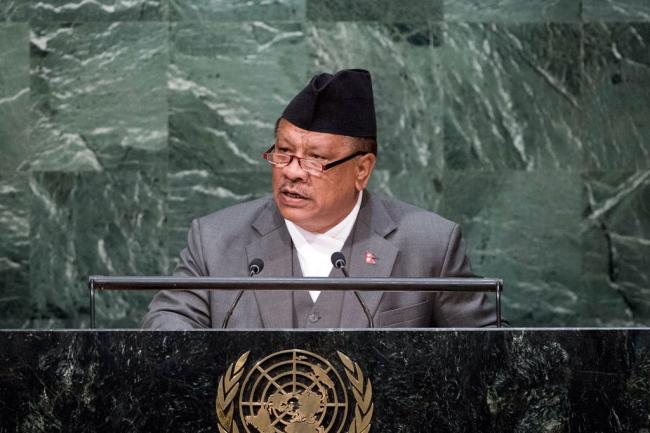 India Blooms News Service | | 02 Oct 2015, 03:55 pm
#Nepal, # UN, # General Assembly
New York, Oct 2 (IBNS): Noting that the number of least developed countries (LDCs) has grown from 25 to 48 since 1971, with only four countries "graduating" from this status, the Deputy Prime Minister of Nepal on Thursday told the United Nations General Assembly that their struggle has been "unfairly long."

“An enhanced level of partnership and collaboration is the key to address the challenges,”said Prakash Man Singh from the podium, noting that his country welcomes the Addis Ababa Action Agenda adopted in July – a series of bold measures to overhaul global finance practices and generate investments for tackling a range of economic, social and environmental challenges.

The leader of the Nepali congress also said he was pleased to share that after about eight years of “rigorous democratic exercise”, Nepal promulgated an inclusive constitution 11 days ago, which guarantees 33 per cent of women representation in the national parliament.

Meanwhile, on the topic of peacekeeping, Minister Singh said Nepal has been consistently contributing to UN efforts for about six decades now.

“More than 120,000 peacekeepers have served so far with distinct professionalism in more than 40 different missions around the globe and 70 have made the ultimate sacrifice in the line of duty,” he declared.

Regarding migration, he said it has “emerged as a mega-trend,” with migrant workers constituting a significant dimension of the current human mobility.

“In view of the greater vulnerabilities of such people, due recognition and priority should be given to the protection of their rights and dignity,” he underlined.

Finally, the Nepalese politician said his country has been overwhelmed by the expression of solidarity and cooperation from the international community on an “unprecedented scale” in the aftermath of the devastating earthquakes that struck Nepal in April and May.