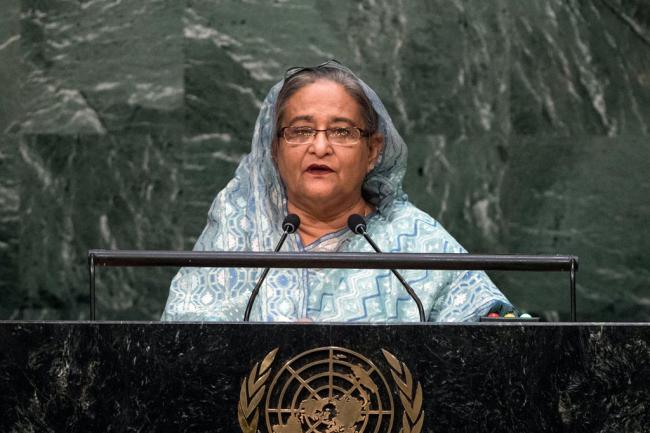 “I am myself a victim of terrorism and violent extremism,” Prime Minister Sheikh Hasina of Bangladesh said, recalling that on 15 August 1975, her father, mother, three brothers and other close relatives were brutally assassinated.

“I was subject to terrorist attacks 19 times,” she continued. “My Government, therefore, maintains a ‘zero-tolerance’ policy to all forms of terrorism, violent extremism, and radicalization.”

She insisted that her country is steadfast in tackling the extremists and anti-liberation forces who “continue to remain active in destroying the democratic, progressive and secular ethos” of Bangladesh.

She noted that the new 2030 Sustainable Development Agenda, adopted by the Member States of the UN last Friday, makes it clear that all actions need to be underpinned by the strong commitment to protect and preserve the planet and biodiversity.

“Bangladesh has taken lead in building regional cooperation processes,” she explained. “We have also taken initiatives to develop infrastructures to enhance trade and people-to-people contacts among Bangladesh, Bhutan, India and Nepal.”

Sheikh Hasina also announced the decision to lead the Global Forum on Migration and Development 2016, with migration having been recognized as a key enabler of development in the 2030 Agenda.

“Bangladesh is widely recognized today as a role model for the developing world,” she underlined, noting that during the last six years, the country’s average gross domestic product (GDP) growth remained about 6.2 per cent despite global recession.

She informed world leaders that Bangladesh now offers stipends to 13.4 million students from poor families and free education for girls up to higher secondary level. The Government also distributed over 334 million free text books throughout the country.

“Our lead role in the UN in promoting the rights and well-being of persons affected by Autism and other neuro-developmental disabilities emanate from our efforts to build an inclusive society,” she added.

Finally, the Prime Minister recalled that her country recently settled the maritime and the land boundary demarcation and related issues with its neighbours, India and Myanmar.

“We exchanged 162 enclaves whereby more than 50,000 ‘stateless’ enclave residents have got their much cherished citizenship’,” she said, adding that by doing so with India, a unique precedent has been set for the rest of the world.