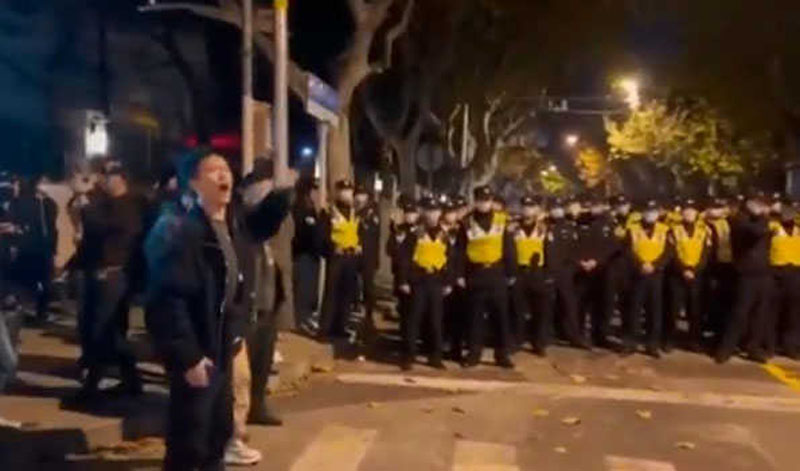 Beijing: Residents of China's Shanghai took to the streets on Sunday to protest tough COVID-19 restrictions and lockdowns imposed by the authorities amid a record number of daily infections, a local resident told Sputnik.

The Chinese citizen, who wished to remain anonymous, shared footage showing a crowd gathering at one of the city's intersections and a large number of police officers at the scene. In the past few days, many similar videos, allegedly filmed in various Chinese cities, have appeared on social media. They show people chanting slogans criticizing the government's COVID-19 response. Once posted, the videos are quickly removed from Chinese social media.

Earlier on Sunday, students from Tsinghua University in Beijing — China's most prestigious higher education institution — also staged a rally in disagreement with tough COVID-19 restrictions, according to a Russian student, who witnessed the events.

The increase in mass protests across China is in part driven by a recent fire in a residential building in Urumqi — the capital of the Xinjiang Uygur Autonomous Region — on November 24. The incident killed 10 people. Some internet users have expressed the opinion that the deaths could have been avoided if the government had not imposed COVID-19 restrictions on the residential complex. The regional authorities launched a thorough investigation into the deadly fire and vowed to bring those suspected of dereliction of duty to justice, Chinese media reported on Saturday.

Daily COVID-19 cases in China have been hitting record highs for the fourth day in a row. Over the past 24 hours, 39,791 cases were registered in the country. In total, 307,802 cases with COVID-19 symptoms, including 5,233 fatalities, have been registered in mainland China since the beginning of the pandemic. Asymptomatic cases of infection are not included in the statistics.

Due to numerous local COVID-19 outbreaks and the deterioration of the epidemiological situation in the country, the Chinese authorities introduced partial lockdowns in some areas, while also forcing their residents to undergo PCR testing on a daily basis. In particular, starting from November 24, restrictive measures have been tightened in a number of China's major cities, including Beijing and Shanghai.

China has adhered to a zero-tolerance policy towards COVID-19 cases almost from the very beginning of the pandemic. Chinese epidemiological control is one of the strictest in the world.