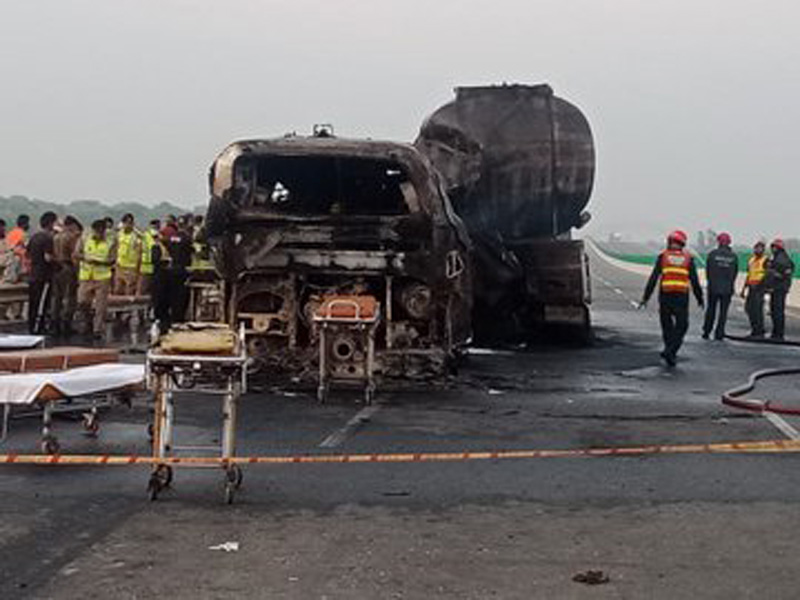 At least 20 people died and six others were hurt when a  passenger bus collided with an oil tanker on the Multan-Sukkur Motorway (M-5) in Pakistan on Tuesday, media reports said.

Multan Deputy Commissioner Tahir Wattoo confirmed to Dawn News that the incident in a statement, saying that the passenger bus, which was travelling from Lahore to Karachi, hit the oil tanker from the rear side at Jalalpur Peerwala interchange on the motorway.

Fire erupted after the collision occurred.

Multan Commissioner Amir Khattak later confirmed the incident and shared images of the collision on Twitter.

Meanwhile, DawnNewsTV quoted a motorway police spokesperson as saying the tanker was carrying thousands of litres of petrol.

At 4am at motorway obarra junobi terrible accident happened between bus LES -1211- 09 and Oil TankerLDA/6. Bus that was moving from Lahore to Karachi hit oil Tanker from backside and fire erupted.06X persons got Injured and 20X died on the spot.On spot monitoring rescue process pic.twitter.com/r87E2OvvmF

He added that the apparent cause of the accident was the bus driver falling asleep.