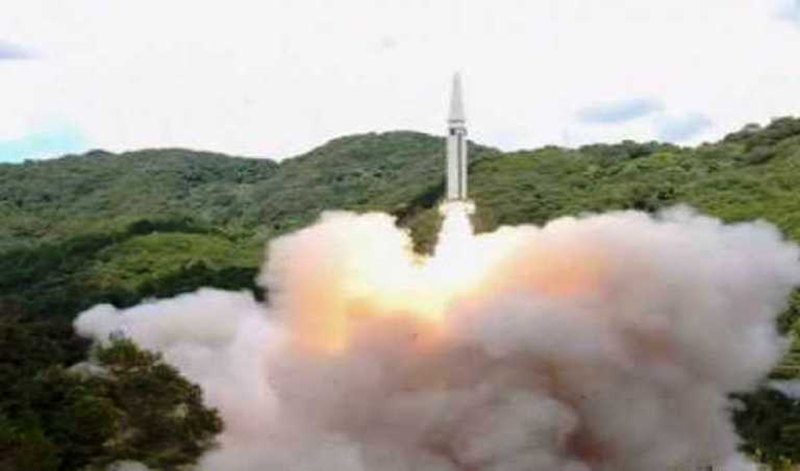 The People's Liberation Army fired 11 Dongfeng ballistic missiles into waters north, east, and south of Taiwan between 1:56 p.m. and 4 p.m. local time Thursday, the island's Defense Ministry was quoted as saying in a statement.

Sun Li-fang, a ministry spokesman, earlier said missiles had been fired from land.

It was, however, unclear if any went over Taiwan.

The missiles fell in a training area designated by China, located southwest of Hateruma Island in the southern prefecture of Okinawa, it said, and it urged Beijing to halt the military exercise immediately.

"This is a grave issue that concerns our country's national security and the safety of the people," Japan's Defense Minister Nobuo Kishi said, calling China's move "extremely coercive."

Hateruma is close to Taiwan and other islands such as Yonaguni and the Senkakus in the East China Sea.

The westernmost Japanese island of Yonaguni is a critical defence line for the Self-Defense Forces, while the Senkaku Islands, administered by Tokyo but claimed by Beijing, are at the heart of bilateral friction.

Japan had expressed its grave concern about China's military drills in locations near Taiwan from Thursday to Sunday, saying that the area overlaps with the EEZ, according to Kyodo news.

The drills came in response to Pelosi's visit to Taiwan earlier this week, which has angered China and led to a flare-up in cross-strait tensions.

The United States has said Pelosi's trip to self-governed democratic Taiwan does not signal a change in U.S. policy on the island.

Pelosi landed in Taiwan on Tuesday amid a face-off with China over her visit.

Beijing, which considers Taiwan as part of its territory, had earlier promised "grave consequences" over her visit.

US Secretary of State Antony Blinken said the US had engaged Chinese counterparts in recent days at "every level of government" to convey a message of restraint after Pelosi's trip, which Beijing has called "an infringement on China's sovereignty and territorial integrity."

China had called the visit by US Speaker Nancy Pelosi to Taiwan "extremely dangerous".