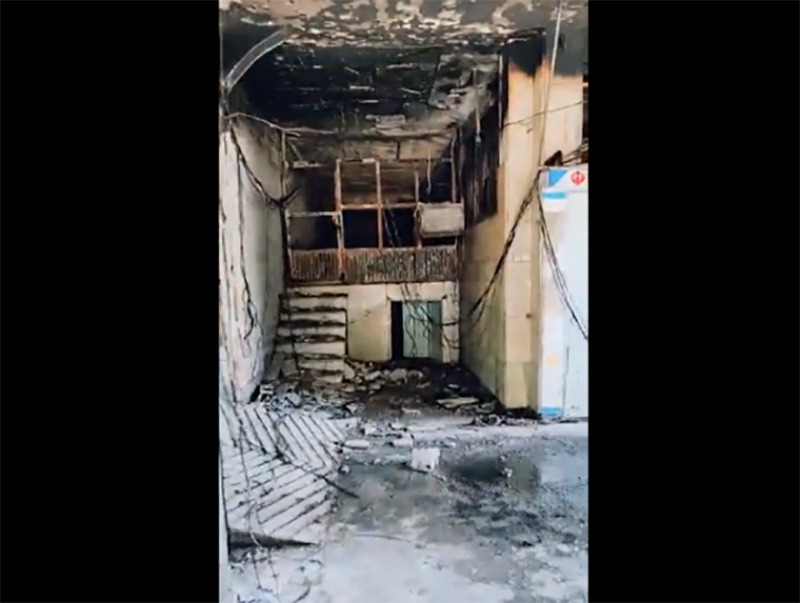 Kabul/New Delhi/UNI: An Afghan Sikh devotee and security personnel of the Islamic Emirate of Afghanistan were killed when terrorists suspected to belong to the Islamic State Khorasan faction attacked the Gurdwara Karte Parwan in Kabul in a bomb and gun attack early on Saturday morning.

The Taliban security forces quelled the attack, but the gurdwara premises were severely damaged and burnt in the siege.

“The security forces (Mujahideen) were able to immediately mobilize to control the attack and eliminate the attacker in a short time to prevent further casualties,” said Khalid Zadran, Kabul Police Spokesman.

According to Zadran one IEA forces and one Hindu Sikh were killed and seven others were injured in the attack.

Savinder Singh, a 60-year-old Afghan Sikh, was killed in the attack. He was a native of Ghazni province, while his family resides in Delhi.

The attack was launched at about 6.30 am. The Interior Ministry said the terrorists had used a grenade to gain access to the facility.

“Before entering, the enemy attacked the guards with a grenade, which caused a fire, and two of our Hindu compatriots, who were injured in the attack, were evacuated and taken to hospital for treatment,” read the MoI statement.

According to the Afghan government, the terrorists wanted to detonate a car bomb near the gated entrance of the Gurdwara but it detonated before that. The terrorists then lobbed a grenade and stormed the building. Black smoke was seen billowing in the air, and the gurdwara premises was on fire. The number of terrorists involved in the attack is not known.

In its latest Magazine “Voice of Khorasan issue8”, the Islamic State threatened, “Whoever attack the honour of the Prophet will be killed.” Magazine ended with, “So Wait For A Heavy Reckoning”, clearly indicating the ISIS-K to be behind the Kabul Gurdwara attack.

Sikh leader Manjinder Singh Sirsa said that all the Afghan Sikhs and Hindus trapped inside the gurdwara were evacuated.

Later, he tweeted that one Sikh holy book, Guru Granth Sahib, was brought out.

Visuals of the attack scene showed debris and gaping holes in the gurdwara due to the bombings and the walls burnt black.

“The cowardly attack on Gurudwara Karte Parwan should be condemned in the strongest terms by all.
“We have been closely monitoring developments since the news of the attack was received. Our first and foremost concern is for the welfare of the community.”

Afghan leader Amrullah Saleh who is living outside the country said in a tweet that the attack is by the Haqqani network of terrorists: “Can't find lethal enough words to express condemnation of the heinous terrorist attack against the Gurdwara in Kabul targetting preaceful Sikh citizens of Afghanistan. With ISI-backed Haqqani ruling Kabul and LeT/Jaish roaming free a fair investigation can't be expected. Attack has all halmarks of Haqqani.”

The Indian government said it is deeply concerned at the reports and is closely monitoring the situation.

Ministry of External Affairs spokesperson Arindam Bagchi in a statement said: “We are deeply concerned at the reports emanating from Kabul about an attack on a sacred Gurudwara in that city.

“We are closely monitoring the situation and waiting for further details on the unfolding developments.”

“Deeply concerned to hear about the news of an attack at a Gurdwara Sahib in Kabul, Afganistan. Praying to Waheguru Ji for the safety of all the devotees & citizens stuck inside the premises.

"Urge the MEA to look into this matter & ensure the safety of all devotees.”

A Sikh activist tweeted: “I condemn barbaric attack on Gurdwara Karte Parwan Sahib by ISIS Khorasan group. Khorasan has a history of attacking minority Sikhs in Afghanistan & threatened Sikhs to accept Islam or face another attack on Gurdwara. All nations must unite in condemning this violence against Sikhs”.

Union Minister Hardeep Singh Puri tweeted: “Deeply concerned to hear about the heinous attack on Gurdwara Karte Parwan in Kabul.
“Pray for the well-being & safety of the members of the Sangat.”

Harjinder Singh Dhami, President, Shiromani Gurdwara Parbandhak Committee, strongly condemned the attack. He has written to the Prime Minister’s Office to ensure the safety and security of Sikhs and Hindus in Afghanistan. He appealed to the Punjab and central governments to provide security to Sikhs who are in Afghanistan or bring them to India.

Former Afghan Ambassador to India Shaida Abdali said: “The sophisticated nature of conflict continues in Afghanistan: Attack one day on the mosque in Kundoz, next day on Gurdwara in Kabul amplify the scope of this conflict. Hence, Afghanistan continues to be a victim of the larger conflict that needs to be resolved in the larger context.”

Habib Khan, an Afghan, tweeted: “A complex terrorist attack targeted a Gurdwara in Baghebala area of Kabul city. The neighborhood is home to Afghan Hindu and Sikh communities. So far, three blasts are heard in the area and heavy gunshots continue. No word on casualties at this stage.”

The UN Assistance Mission in Afghanistan has strongly condemned the attack on the gurdwara and urged for protection of the minorities in Afghanistan, including Sikhs, Hazaras and Sufis.