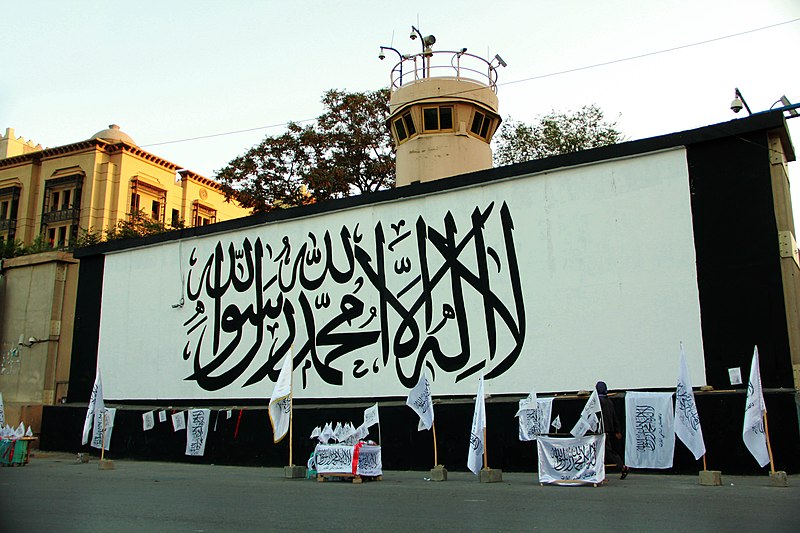 Taliban | Afghanistan
Taliban's flag on the US Embassy's wall in the Afghan capital of Kabul. File photo by Ahmad Elhan via Wikimedia Commons

Kandahar, Afghanistan: The Taliban have reportedly forced shopkeepers in Afghanistan’s Kandahar city to install their group’s white flag in their shops and buildings, while health clinics and public baths have too been asked to follow the suit.

Taking to Twitter, a local media outlet in Afghanistan, said, “Taliban in Kandahar forced the installation of the group’s white flag on shops and public places, local sources reported.”

According to reports, the latest order has been issued by the Taliban officials in PD9 of Kandahar Municipality in a letter to shopkeepers and businessmen.

Meanwhile, the Taliban forces in Afghanistan's Herat province have warned the shopkeepers not to allow women in their shops without a male guardian.

”The Taliban in Herat province have warned shopkeepers not to allow women into their shops without Muharram (male guardian), and the group has expelled women who were shopping alone, sources said. The Taliban have called for this action to prevent “sin and immoral cases,” a local Afghan media took the matter to Twitter.

This is not the first time that Taliban forces have tried to attack women’s rights as it has imposed a number of restrictions on women and girls after seizing power in Afghanistan in mid-August last year.

Earlier in May, the Taliban government of Afghanistan issued a decree making the hijab compulsory for women when being in public.

The humanitarian situation in Afghanistan has deteriorated drastically since the Taliban took control of Kabul last year.