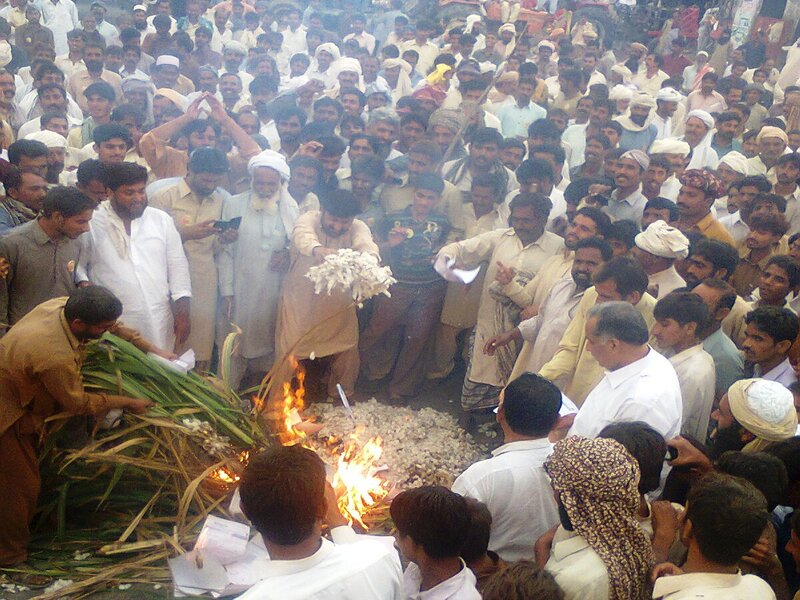 Sahiwal, Pakistan: The Pakistan Kissan Ittehad (PKI) on Monday demonstrated at Rangu Pull on Khanewal-Multan Road to mobilise farmers for the wider agitation against the government over issues ranging from power tariff to high prices of fertilizers.

Hundreds of farmers participated in the peaceful demo that is part of a series of protests being staged in different districts of Punjab before the final agitation planned for federal capital for availability of fertilisers at controlled rate and bringing down power tariff for farmers etc, reports The Dawn.

The group has not announced the date of hosting a protest in Islamabad.

The farmers’ agitation has been entitled “Bezuban Janwar and Bebas Kisan March”, reports The Dawn.

Chaudhry Rizwan, the PKI provincial president, and Khalid Mahmood Khokar, its central president, addressed the farmers who joined the protest from different villages of Khanewal and Multan districts.

The farmers, who were participating in the demonstration, burnt an effigy of Prime Minister Imran Khan and chanted slogans against the PTI’s Punjab and federal governments for not fulfilling the promises made to the farmers organisations.

Khokar told The Dawn on phone that they would march on Islamabad along with farmers and demos were being held in districts to mobilise the participants.

He said the protesters were demanding that power tariff for agricultural use should be fixed at Rs 5.35 per unit, besides DAP rate between Rs 3,000 and Rs 4,000 and Urea fertiliser rate at Rs 1,768 per bag in the open market.