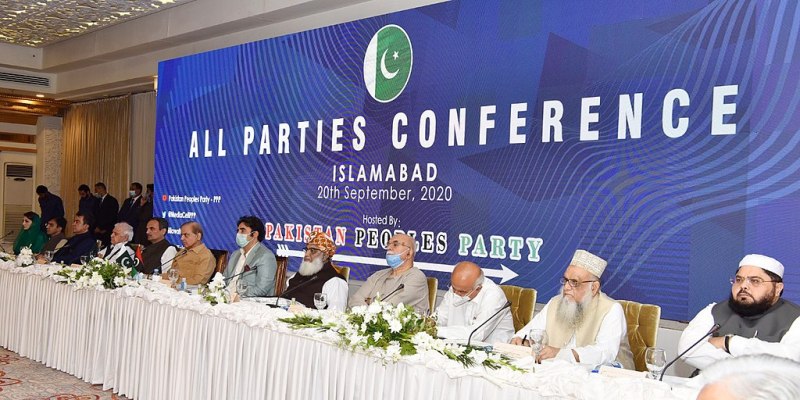 component parties of the opposition Pakistan Democratic Movement (PDM) will be meeting again on Monday.

Citing sources from the opposition parties Dawn reported that there were differences among the parties, mainly between the two major components of the PDM — Jamiat Ulema-i-Islam-Fazl (JUI-F) and Pakistan Muslim League-Nawaz (PML-N) — over the issues of en masse resignations from parliament and converting the long march into an indefinite sit-in.

Moreover, the two parties also differ on the issue of boycotting the upcoming local government elections in Punjab and Khyber Pakhtunkhwa.

According to the report, JUI-F chief Maulana Fazlur Rehman thinks that they should start their long march after submitting resignations from the parliament, on the other hand, PML-N opposed the idea saying that such a move would prove futile if collective resignations do not come from all the opposition parties, including the Pakistan Peoples Party (PPP).

The PDM, in their last meeting on Nov 23, had failed to come up with a plan to launch its anti-government protest campaign and choose Dec 6 to come up with ‘a final policy’.

It is reported that the Maulana, in the last meeting, offered to quit the opposition alliance’s presidentship. However, Nawaz Sharif persuaded the JUI-F chief not to do so and sought time till December 6 for in-house consultations.

While talking to reporters about the decisions of the steering committee on Nov 22, PDM spokesman Hafiz Hamdullah had said they had proposed protest rallies, road caravans, sits-in, shutter-down and wheel-jam strikes over the next four months and a final long march towards Islamabad in March next year. He had claimed that the option of resignations from the legislatures was also under consideration, reported Dawn.

PDM’s general secretary Shahid Khaqan Abbasi, earlier on Nov 6 had decided to launch a “decisive” anti-government protest campaign, starting with a public meeting in Karachi on Nov 13 and culminating with a long march to Islamabad.