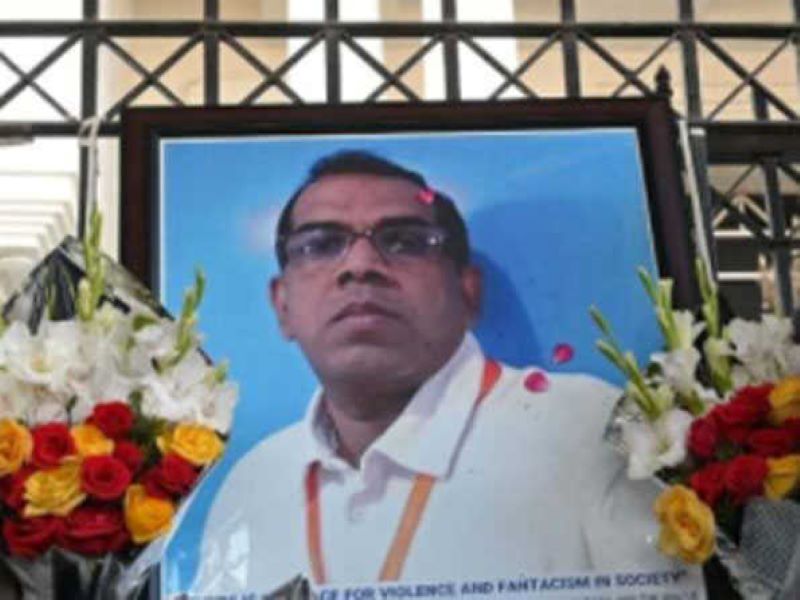 Islamabad/UNI: A new video of Sialkot lynching incident has surfaced showing that a fellow worker had tried to save the victim from the mob.

The incident took place on Wazirabad Road in Sialkot on Friday. The Sri Lankan, identified as Priyantha Kumara, was a senior manager at a leading Sialkot factory that manufactures and exports sports products.

A frenzied mob in Sialkot in Pakistan tortured a Sri Lankan factory manager to death and then burnt his body in public allegedly over allegations of blasphemy. Punjab Police said they have arrested 100 suspects.

The newly-released footage obtained by Dawn shows a colleague trying to protect Priyantha Kumara Diyawadanage on the roof of the factory where he had fled while the mob of around two dozen people slowly grew in number.

The mob could be heard chanting slogan and saying "he (the manager) will not escape today," while the colleague helplessly tried to shield Diyawadanage, who clung to the man's legs.

However, the mob overpowered the colleague and dragged Diyawadanage out on the road.

He was then kicked, stoned and beaten with iron rods, killing him on the spot. His body was then set on fire.

The Sri Lankan apparently tore up a poster of the hardline Islamist party, Tehreek-e-Labbaik Pakistan (TLP) in which Quranic verses were inscribed and threw it in the dustbin.

The poster of the Islamist party was pasted on a wall adjoining Kumara’s office. Some factory workers saw him removing the poster and spread the word.

Rumours of blasphemy spread among the factory workers and they first came out of the installation to protest on the road. The mob then re-entered the factory and tortured the victim, beating him to death.

Condemning the incident, Sialkot Chamber of Commerce and Industry (SCCI) President Mian Imran Akbar said in a statement, “Studying the details of the case, it was found that Priyantha was a thorough professional known for his stern production standards and that the personal vendetta on part of some labourers in the garb of alleged religious tilt led to the lynching and torching”.

“December 3 would go down as a dark day in the history of the bustling city…there was no place for fanaticism and violence in the society and that the miscreants involved in such wicked acts did not belong to any religion, caste, creed," he added.