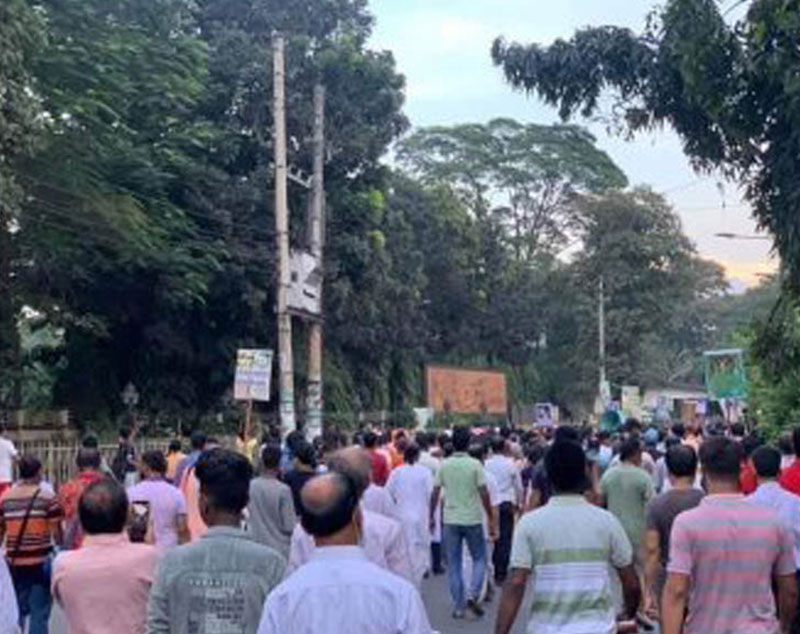 Dhaka: Teachers and students from Dhaka University and other institutions joined to block Shahbagh intersection in Bangladesh capital city Dhaka on Monday to protest against the ongoing attacks on Hindu temples and Durga Puja venues in different parts of the country.

Around 10:30am, hundreds of DU students gathered at Shahbagh intersection while some other protesters under the banner of Swamibag Ashram ISKCON held a rally at the Jatiya Press Club earlier in the day and marched towards Shahbagh, reports Dhaka Tribune.

The demonstrators blocked roads to Paltan, Science Laboratory, Bangla Motor, and the TSC.

Traffic movement was stopped in several parts of the city amid demonstrations.

They called off the protests around 2:15pm after issuing their seven-point demands that include ensuring the highest punishment for the perpetrators, compensation for the victims, repairing the damaged temples, and forming a minority protection commission, reports Dhaka Tribune.

They also demanded 15% allocation in the national budget for the religious minorities and turning the Hindu Welfare Trust into a foundation.

Addressing the protesters at Shahbagh, Jagannath Hall Provost Mihir Lal Saha was quoted as saying by the newspaper: "The spirit of independence of our country is not being upheld anymore."

Bangladesh has remained tense in recent times when several Hindu temples and Durga Puja pandals were attacked by miscreants during the 10-day-long festival.