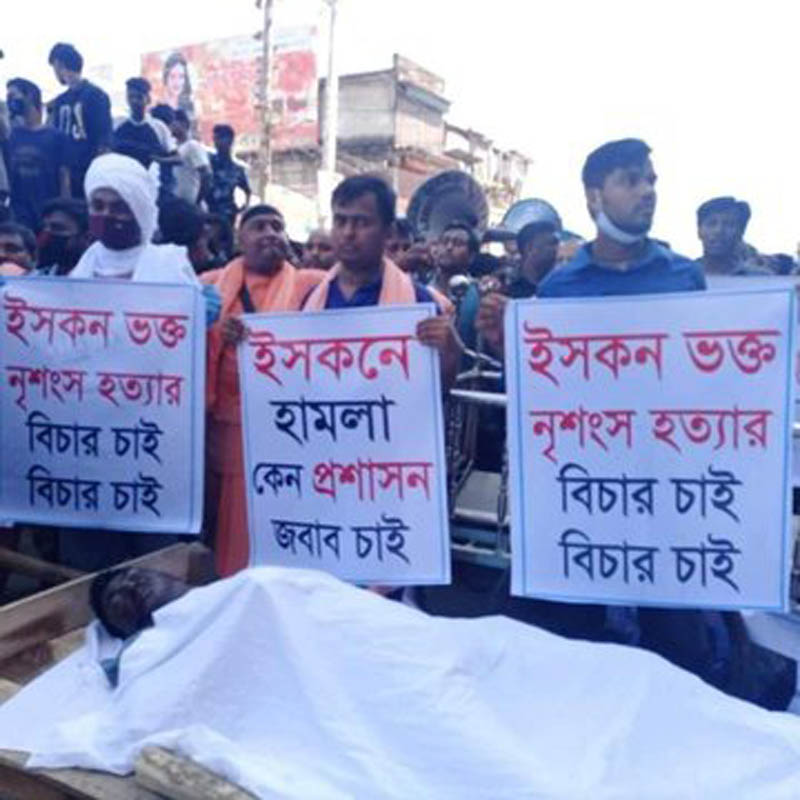 Dhaka: Bangladesh  Home minister Asaduzzaman Khan on Sunday said he is hopeful that those involved in the vandalization of Durga Puja pandal in Cumilla area, which triggered violence and destruction of pandals and Hindu temples across the country, will be arrested.

“The way we are advancing, we hope to make arrests of the people involved in the incidents,” he told newspersons at the secretariat as quoted by Prothom Alo.

Asaduzzaman Khan said 2-3 suspects have been arrested in the incidents at the puja mandap in Cumilla.

“The real perpetrators will also be identified," the Minister said.

Protest demonstrations denouncing the communal attacks on Hindu temples, idols and properties during the Durga Puja celebrations were held across Bangladesh on Saturday, even as fresh incidents of attacks on members of the minority Hindu community and their property were reported in Feni, in southeastern Bangladesh.

People, including members of the Hindu community, demonstrated in different parts of Bangladesh, demanding immediate arrest of those behind vandalising Durga Puja mandaps, and Hindu temples and homes and properties.

The protesters observed a half-day sit-in in Chattogram and defied section 144 – a ban on gatherings -- in Noakhali.

Different political and social organisations also joined the chorus in seeking justice for the victims.

Social media was flooded with posts slamming the communal attacks as many netizens said hatred must stop and called for maintaining religious harmony, the Daily Star reported.

The protests were organised following the recent spate of violence in several districts following a rumour that "the Holy Quran was demeaned" in Cumilla.

Idols were vandalised in Munshiganj and Kishoreganj even on Friday and early Saturday.

In Feni, a region in Chittagong subdivision of southeastern Bangladesh, clashes broke out after an attack on demonstrators took place as they were protesting against attacks on Durga Puja venues in several places of Bangladesh.

On Saturday night, the authorities deployed additional police forces and border guard troops after several temples and businesses owned by Hindus were vandalized and robbed during clashes that lasted from 4.30 pm to midnight.

At least 40 people, including OC Nizam Uddin of Feni Model police station, were injured in the clash.

Many of them have been admitted to the Feni General Hospital, according to media reports.

Hindu temples in Feni are under attack. pic.twitter.com/6SLd7iRgLh

How did it start?

The alleged desecration of the Quran at a Dugra Puja venue in Cumilla on Wednesday resulted in vandalism of Hindu temples and clashes between vandals and police.

Several other districts, including Chandpur, Chittagong, Cox's Bazar, Bandarban, Moulvibazar, Gazipur, Chapainawabganj, and others, have seen similar situations in the last few days.

Dozens of people have been arrested in connection with the attacks and the spreading of communal hatred on social media.

Security was ramped up at houses of worship, and Border Guard Bangladesh troops were dispatched to more than two dozen districts.

The 10-day festival came to a close on Friday with the immersion of Durga idols.

At least four people were killed in police shootings during attacks on puja locations in Chandpur's Hajiganj on Wednesday while in Noakhali's Choumuhani, attacks on Hindu temples left two people dead on Friday.

The government and law enforcement agencies have described the incidents as “planned” in a bid to destabilize the country.

Bangladesh Puja Udjapan Parishad President Milon Kanti Datta said at a rally in the capital that this violence continued as those who carried out the earlier attacks on the minorities were not punished.

The government should take the responsibility for its failure to take proper steps, he added.

Defying section 144, several thousand people demonstrated in Chowmuhoni area of Noakhali on Saturday, protesting attacks on temples and people of the Hindu community in the district.

Hindu devotees brought out a procession carrying the body of Pranta Das, which they said was found in a pond next to an Iskcon temple in Chowmuhoni.

They later staged a sit-in blocking the Chowmuhoni-Feni Road.

The demonstrators demanded punishment of the killers and those who attacked Hindu temples.

They also sought removal of the district's deputy commissioner, superintendent of police, Chowmuhoni upazila nirbahi officer and the officer-in-charge of Begumganj Police Station for their failure to stop the attacks.

Noakhali district member secretary of Bangladesh Hindu-Bouddha-Christian Oikya Parishad, Pappu Chowdhury, said, "We give the authorities two days' time to meet our demands. We will announce a shutdown for an indefinite period if those are not met within the deadline."

On Friday night, the authorities had imposed section 144 in Chowmuhoni area for an indefinite period following an attack on the Bijoya Durga Temple on College Road in Begumganj area.

Meanwhile, Rana Dasgupta, general secretary of Bangladesh Hindu Buddhist Christian Oikya Parishad, has said the attacks on religious minorities, their temples, houses and businesses in Bangladesh are part of a blueprint to force them to leave the country.

Talking to The Daily Star, he said the “ideological ancestors of the defeated forces in the Liberation War were behind the attacks”.

IskconInc statement on the violent attack by mob on @IskconBDH temple and devotees in Noakhali, Bangladesh pic.twitter.com/RbAXDAuf6o

The religious fundamentalists, who failed to create a country based on religion in 1971, are now out to achieve their goals, he said.

"They are active to create communal unrest and instigate religious sentiment of common people by spreading propaganda via different media.

"It is unfortunate that a majority of the grassroots leaders of the ruling Awami League are also seen joining them in conducting the attacks," he observed.

Rana also said, "Awami League chief and Prime Minister Sheikh Hasina is sincere in maintaining religious harmony in the country. But for mysterious reasons, it does not reach the grassroots activists of the party."

Queried, Rana said there must have been a political motive behind the incidents of mayhem directed at the Hindu community.

"The ratio of Hindu people has decreased to 10 percent from 29.7 percent of the total population in the country. If the members of the religious minority groups can be put under pressure and tension round the clock through these attacks, they would feel unsafe and think of leaving the country at one stage.

"If the ratio of the Hindus could be decreased to four to three percent, they would be no longer a factor in the electoral politics," he said, adding, "In that case, all the political parties would be put on a religious veil to win the polls."

For example, a secular party like the Awami League will turn into "Awami Muslim League" and this way, the ideology of the fundamentalists will be achieved, he added.

In that case, whichever party wants to go to power has to take religion as the main weapon, he further added.

Rana said the unity of all democratic forces in the country is required to resist the fundamentalist evil forces.

"We have to form a greater alliance with all the democratic forces if we want the country to remain a state for all citizens irrespective of religious and ethnic identities," he said, adding, "There is no alternative to it."