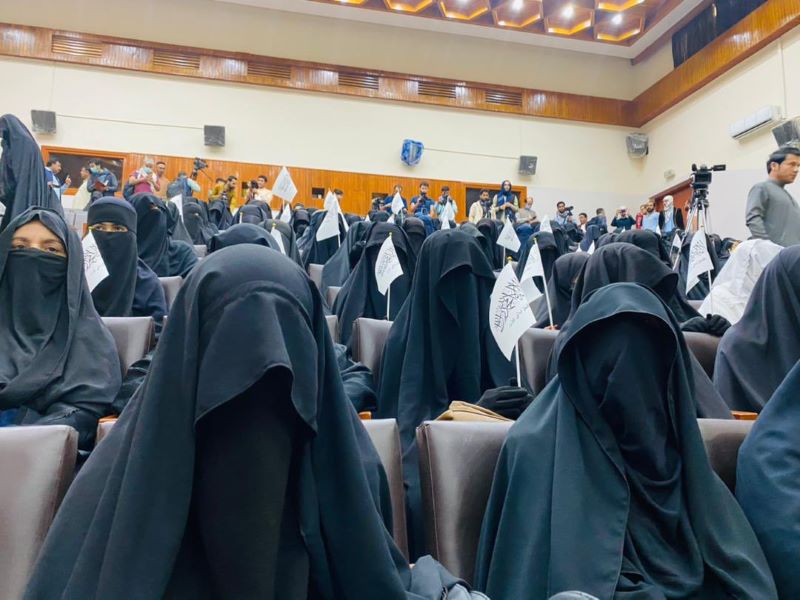 Kabul/UNI: Since taking power over a month ago, the Taliban has been imposing restrictions on women’s education in universities and schools in Afghanistan.

In its latest decision, the Taliban has resumed secondary education only for male students, and not issued any specific instruction regarding female teachers and students.

On Friday, the Taliban government resumed secondary education across the country but only for male students. “All male teachers and students are must be present at schools and resume their lessons from Saturday, September 18, onward,” the statement instructed.

Since September 6, women are facing a new restricted environment in the universities.

The newly-introduced strict rules and regulations, which are expected to be followed by many more restrictions, will have a grave impact on the Afghan women’s public and social participation, writes Kabul News.

On September 6, when the universities opened after approval of the Taliban caretaker government, photos showing a thick curtain drawn between male and female students in a class began circulating on social media.

The restrictive move sparked widespread condemnation and became a subject of mockery.

“Instead of drawing the curtain, you need to purify your mindsets. Otherwise, you cannot draw curtains on streets, markets, and campuses of universities,” Roqia Ranjbar, a young female activist, wrote on her Facebook addressing the Taliban policy makers.

It was posted on the Facebook page of the Ministry of Higher Education with a statement saying that the women declared support for the “Islamic Emirate of Afghanistan” – Taliban’s preferred name for its government – and its plans against co-education system.

“Speakers expressed support for gender-segregated courses at institutes of higher education and elaborated on the harms of the co-education system in an Islamic society,” the statement read.

Afghan women came out to protest in Nimroz Province in support of an Islamic System including their right to wear a Niqab by their own FREE WILL and welcoming the new Government. #Afghanistan #Taliban#أفغانستان #أفغانستان pic.twitter.com/AzkYIxqHJr

This move also provoked widespread reaction among social media users and spurred a campaign by Afghan women posting their own photographs with different and colorful traditional attires.

They launched a hashtag campaign titled #DoNotTouchMyClothes on Twitter. 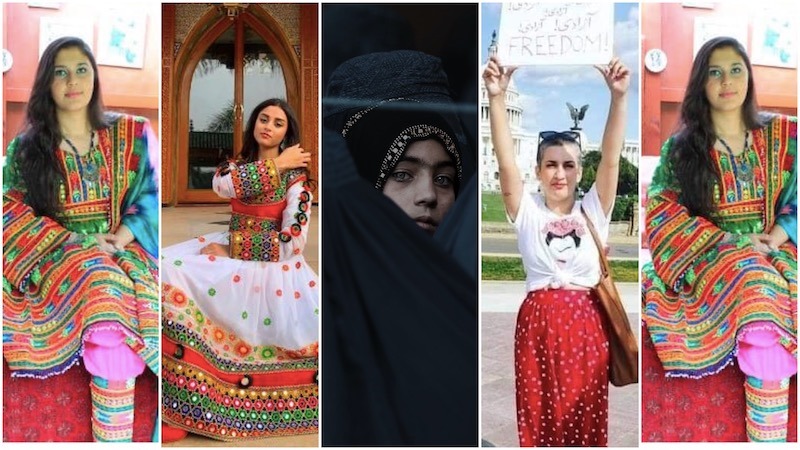 “The black dress code Taliban is imposing on Afghan women is not our culture. This is our traditional attire and culture. It’s colorful and unique,” said Rada Akbar, an artist, on her twitter.

Joining the hashtag campaign against the Taliban’s dress code, Shafi Karimi, a freelance journalist, posted his own photo with his wife showing the couple in a green village in Bamyan while his wife wearing a hand-made embroidered Hazaragi dress. “This is Afghan culture and this is how Afghan women dress,” he wrote on twitter.

During its first rule (1996-2001), the Taliban had not only banned women’s participation in all social and public events but the group even did not allow women to step out without a male companion or laugh aloud. After the Taliban regime was toppled in 2001 by the US military invasion and the Northern Alliance, Afghan women got legal recognition and made significant achievements in different fields.

The Afghan Constitution grants equal rights to men and women. Afghan women actively participated both as voters and candidates in the country’s presidential, parliamentary, and provincial council’s elections over past 20 years.

Twenty five percent seats of the Parliament was allocated to female-MPs – more female representation than in the US Congress (20 per cent) or the British Parliament (23 per cent), according to the Farewell Kabul (from Afghanistan to a more dangerous world) written by Christina Lamb.

Even as the Taliban made their return to Kabul last month, Afghan women continued to make progress and headline-making achievements.

Ten days after the Taliban’s takeover of the capital Kabul, a female participant stood as the topper of Kankor, Afghanistan’s nationwide university entrance exam.

It was the second consecutive year in which a female participant scored the highest in an annual competitive exam among tens of thousands of test takers.

Last year, Shamsia Alizada, daughter of a coalmine worker, got the highest score and made headlines for national and international media at the time the intra-Afghan talks with the Taliban were bogged down in Doha, capital of Qatar.

Salgai had participated the nationwide exam from Kabul where the female participants formed around 40 percent of the Kankor takers.

The Taliban has introduced a new code for female students at private and state run universities after the group picked Shaikh Abdul Baqi Haqqani as their Minister of Higher Education.

At the very event in which the Taliban minister congratulated the newly-admitted university students, that included Salgai, he emphasized on developing religious seminaries.

“Religious and contemporary education centers are among those institutions that the Islamic Emirate of Afghanistan is committed to support and develop them further because they are important in development of an Islamic country,” the Ministry quoted Haqqani as saying at the event in a statement issued on August 29.

“Now, we are facing an uncertain future. I don’t what will happen next, whether I’ll be able to achieve my goals or not. I call on the current government to ensure the women’s rights for they form half of the society,” Salgai said when she was asked about the Taliban rule in an interview with Afghanistan International TV.

She added that the consecutive collapse of districts, the provinces, and ultimately the government collapse into the hands of the Taliban has had a negative impacts on her studies.

Salgai said that she had defined some specific goals and made plans on how to work on her personal development and become able to serve her country during the reign of the previous government.

“But now if they do not provide me the opportunity and circumstances, I don’t know how to deal with it,” she said about pursuing her dreams under the Taliban rule.

Over the past 20 years, may women’s empowerment initiatives were launched to boost their presence and roles in different areas, particularly in education. Under the Taliban regime, they face restrictions and exclusionary strict policies and an uncertain future.