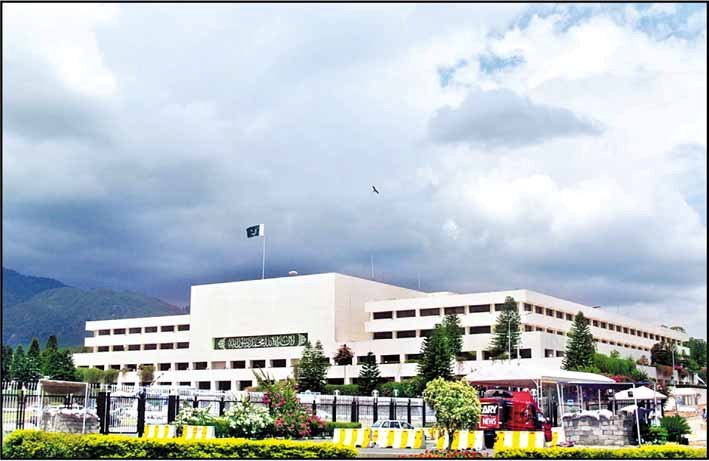 Pakistan National Assembly members scuffle, hurl books at each other

Pakistan National Assembly on Tuesday literally turned into a battleground as treasury bench members scuffled with the opposition and continued their noisy protest to disrupt the budget speech of Leader of the Opposition Shehbaz Sharif for the second consecutive day.

Speaker Asad Qaiser suspended the proceedings of the house thrice when the treasury members, led by some of the senior ministers who had come directly to the house after attending the weekly cabinet meeting, refused to pay any heed to his directives to stay calm and kept on sloganeering, whistling and desk-thumping as Shehbaz Sharif, who had been surrounded by his party members to avoid any physical contact with the treasury bench representatives, continued his speech.

The speaker announced the first suspension of the proceedings for 40 minutes when Ali Nawaz Awan, who is also a special assistant to the prime minister, threw a book towards the opposition benches, which came back to him, Dawn reported.

The proceedings of the house resumed after over two dozen sergeants-at-arms made a human wall separating the treasury and opposition members and bifurcating the assembly hall into two camps.

As soon as Shehbaz Sharif took the floor and started lashing out at the government for its economic policies, the treasury members again stood up and started whistling, desk-thumping and chanting slogans like thief, thief, robber, robber and “TT, TT”, a reference to the term “telegraphic transfer” often used for money laundering in the country.

Some of the members, including Ali Nawaz Awan, were seen and heard using abusive and filthy language. Many members from both sides raised slogans while standing on their chairs.

Parliamentary Secretary for Law Maleeka Bokhari was hit by a flying object and received an injury to her eye. She later received first aid at the Parliament House dispensary. Besides Ms. Bokhari, some MNAs also complained that they had received bruises during the scuffle.

However, the sandwiched sergeants-at-arms faced the brunt of the fight between the treasury and opposition members as they were hit by the books and flying objects.

Interestingly, all this happened in the presence of several senior cabinet members like Shah Mahmood Qureshi, Asad Umer, Shafqat Mahmood, Fawad Chaudhry, Ali Muhammad Khan, Ali Amin Gandapur, Murad Saeed and Shireen Mazari, who not only made no attempt to stop their protesting members but also participated and encouraged them to create rumpus, thus confirming that it was an official policy of the government to not allow the opposition leader to deliver the budget speech.

Members of the other opposition Pakistan Peoples Party, including its chairman Bilawal Bhutto-Zardari, remained seated and silently watched the action-filled proceedings.

The speaker had to suspend the proceedings for the third and last time when he saw the sergeants-at-arms failing to prevent the members from the two sides getting physical. Seeing the situation getting worse, some PML-N members had already escorted Shehbaz Sharif out of the hall even before the suspension announcement by the speaker.

The members continued throwing the documents and other articles at each other for nearly 10 minutes even after the suspension of the proceedings. They stopped only when the lights of the hall were switched off.

After adjourning the proceedings, Speaker Asad Qaiser through his official social media accounts on Twitter announced that he had ordered an inquiry into the events that took place during the assembly proceedings.