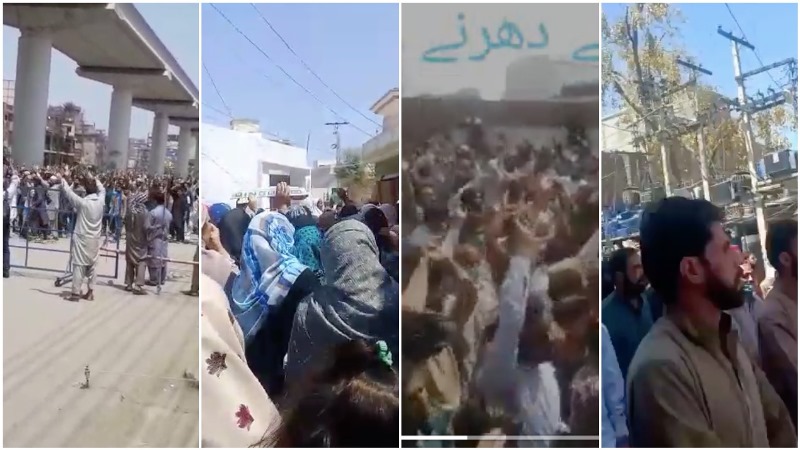 Islamabad: While Pakistan witnessed daylong protests over yesterday's firing on Islamists, Interior Minister Sheikh Rasheed on Monday said 11 policemen, who were taken hostage in Lahore by the proscribed Tehreek-e-Labbaik Pakistan (TLP) group during the clashes, have been released after negotiations carried out by the Punjab government.

Clashes between the banned TLP, an Islamist party, and police in Lahore killed and wounded several on Sunday. TLP has been demanding expulsion of the French ambassador from Pakistan over the French government's stance on freedom of expression vis-a-vis caricatures of Islam’s Prophet Muhammad.

A large number of TLP activists and other citizens today gathered outside Lal Haveli (the residence of Federal Interior Minister ⁦Sheikh Rasheed in Rawalpindi). He has been blamed for ordering the Pakistan Army to open fire on them if the situation went out of control.

There were demonstrations everywhere from Lahore to Karachi today.

In a video statement, the interior minister was quoted as saying by Geo News that the “first round of talks” concluded in a "successful manner" after which the policemen were released and the protesters had gone inside the Masjid Rehmatulil Alameen.

He added that the police had also been withdrawn.

“Talks have begun with the banned TLP and hopefully issues will be resolved with them,” Rasheed was quoted as saying by Geo News.

The four demands of the TLP included the release of their leader Saad Rivi, for TLP to be unbanned, all FIRs against their workers be dropped and a resolution be presented in the parliament to expel the French ambassador, the spokesperson for Lahore CCPO, told Geo.tv.

During peak of terrorism in Pakistan, TTP slaughtered innocent Muslims in name of Allah. Now TLP is on rampage with arson and killings in the name of our beloved prophet (peace be upon him). Our enemies are at work again. Ya Allah! have mercy on us.#TLP #Pakistan #Islam

During Sunday's clash with the rioters in the city, 36 policemen were injured.

A senior police officer tells Geo.tv on the condition of anonymity that around 500 rioters attacked the police station at 8 am.

“As more police arrived, the number of rioters also swelled to nearly 2,000 men,” he said.

“They have a lot of local support in this one area," he said.

Meanwhile, Pakistan is on the brink of a major crisis as several army personnel have shown open support for the protestor, sources said.

"They have posted letters and videos asking the Army Chief to overthrow the government and impose martial law across the nation. They have come in open support of Tehreek-e-Labbaik," the source added.