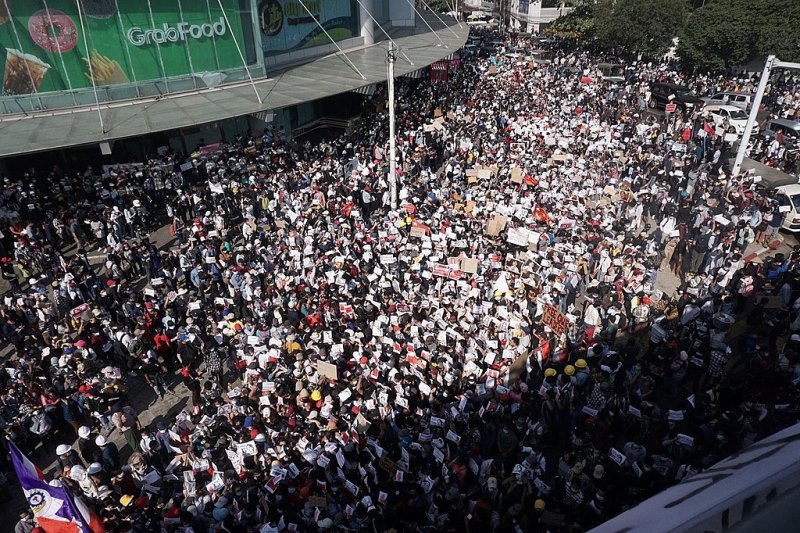 At least six people die in clashes between police, protesters in Myanmar:Reports

Naypyitaw/Sputnik: At least six people died on Sunday across Myanmar during clashes between the police and protesters opposing the recent military takeover, the Irrawaddy news portal reported.

Three demonstrators were killed by the police in Myanmar’s largest city of Yangon, the Irrawaddy said, and posted photos of the deceased on its Facebook page.

Two people died and over a dozen others got injured after a police operation to disperse protesters in the southern city of Bago, the news outlet continued.

In addition, one person who did not take part in demonstrations was killed by a stray bullet in the northern city of Mandalay.

According to Irrawaddy, tens of thousands of people took to the streets in multiple cities across Myanmar on Sunday as mass demonstrations against the February 1 coup have entered their fourth week.

At the same time, tensions between the protesters and the police are rising as law enforcement officers turn to more brutal tactics.

On February 1, Myanmar's military overthrew the government and declared a year-long state of emergency hours before the newly-elected parliament was due to convene.

State Counselor Aung San Suu Kyi and President Win Myint, along with other top officials accused of election fraud, have been detained.

Several western nations, including the US and the UK, have imposed sanctions on Myanmar’s top military officials.